Here's the statement from the IBT:


At the annual Martin Luther King Day march yesterday, more than 400 sanitation workers and Teamster allies joined workers from the 1968 Memphis sanitation strike to demand that Republic Services/Allied Waste [NYSE: RSG] treat its workers equally and with respect. They were joined by sanitation workers in Dekalb County who are fighting to form a union. 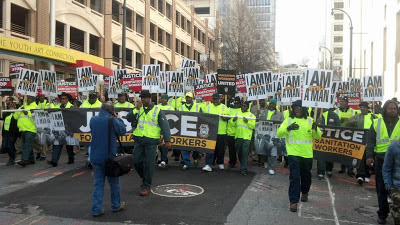 The sanitation workers marched together to honor King’s legacy of defending workers’ livelihoods and to remind us that the dream of economic and social justice must be fought every day. Their banners and signs read “Justice for Sanitation Workers” and “Sanitation Workers United.”

Republic Services/Allied Waste is attacking its workers all across America. In some cities, workers are cheated out of a day’s pay or more when they work overtime. In others, Republic is trying to destroy workers’ retirement security, and to force workers to give up their right to a trial under the Civil Rights Act if the company discriminates against them. 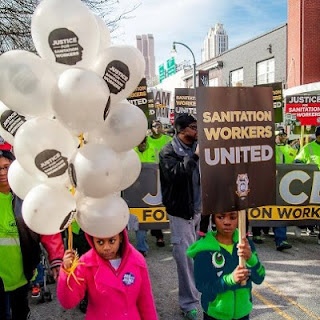 Two sanitation workers from the 1968 strike, Baxter Leach and Alvin Turner, also traveled from Memphis for the march.

“This is the first time I have been to Atlanta since 1968 when I attended Rev. King’s funeral. I traveled here today to stand up for the rights of waste workers whose livelihoods are threatened,” Turner said.

“The Rev. King came to our hometown 45 years ago to support us, and I am honoring his memory by fighting for today’s workers who are facing some of the same issues we faced,” Leach said.

Frontline sanitation workers perform the fourth-most dangerous job in the country. Teamsters employed by the Republic/Allied Waste are standing up to demand that the company stop these abuses now.

“I rode a bus all the way from Memphis because I wanted to honor the Rev. King and his message of fighting for justice and dignity for all workers,” said Ilya Hamilton, a residential driver at Republic Services in Memphis. “This hugely profitable company should treat its workers with respect, and pay us for all the work that we do. As Rev. King said 45 years ago, ‘What good is having the right to sit at a lunch counter if you can’t afford to buy a hamburger?’”

Dekalb County sanitation workers who are organizing to become Teamsters joined Turner and Leach and the Republic workers at a news conference prior to the march.

Republic’s attacks on its workers have increased in the last year. In May, 2012, the company locked out 80 members of Teamsters Local 215 in Evansville, Ind. for six weeks when the workers refused to accept the destruction of their pension. Out-of-town replacement drivers damaged people’s homes, vehicles and even power lines during the lockout.

Last March, the company walked away from a ratified contract with Teamsters Local 991 in Mobile, Ala. Local 991 members were forced to strike to protest the company’s illegal behavior and finally secure a contract. Workers in four other cities across the country honored their picket lines before the company came to its senses a little over a week later. During the lockout in Evansville, workers in five cities honored picket lines before the lockout was ended. 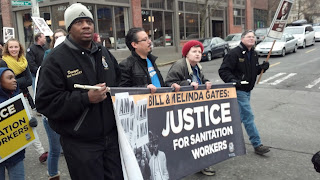 Also yesterday in Seattle, Republic Services workers also took part in the annual Martin Luther King Day march. Republic workers called on Bill Gates to stop discriminating against waste workers. As the primary shareholder of Republic stock, Gates owns approximately $2.4 billion worth of stock, or 25 percent of the total worth of the company.

Republic/Allied Waste’s total revenues were more than $8.2 billion in 2011, with profits of more than $589 million. In May 2012, the same month it locked out its workers in Evansville, Ind., the company approved a death and disability benefit for its CEO valued at more than $23 million.

Posted by Teamster Power at 2:10 PM