Let's take the fight to ALEC, let's investigate the Kochs 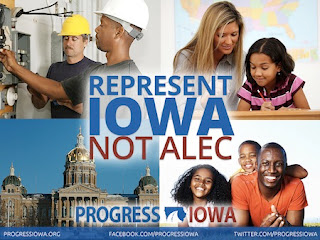 The best weapon we have against these predators is exposure. They have a knack for selling their dangerous ideas as somehow helpful for working families. But the public is less likely to be fooled when they know the true identity of groups like ALEC that are linked to the Benedict Arnold Koch brothers.

Activists around the country are trying to force ALEC into the sunshine. Last year, Democratic lawmakers in Wisconsin and Arizona filed legislation called The ALEC Accountability Act. According to The Huffington Post,


Democratic lawmakers in Arizona and Wisconsin have introduced state legislation seeking public disclosure of who funds the conservative group known as the American Legislative Exchange Council.

ALEC, as the group is known, finances trips for Republican state lawmakers to learn about model legislation it pushes at the state level. Arizona tate. Rep. Steve Farley (D-Tucson) and Wisconsin state Rep. Mark Pocan (D-Madison) have separately put forward legislation designed to disclose ALEC's funding sources. The bills, called the Alec Accountability Act and pending in their respective Republican-controlled legislatures, would redefine ALEC as a lobbying organization since it develops model legislation.

We hope they do it again this year. And that the bills become law.

This year in Minnesota, a bill was filed that would require anyone who promotes cut-and-paste legislation (ALEC's signature tactic) to register as a lobbyist. And legislators would have to disclose any ALEC "scholarship" (i.e., luxury vaction) money they accept. The Minneapolis Star Tribune reported last week,


DFL senators on Monday proposed  expanding who is a lobbyist and what lobbyists need to disclose.

If the measure became law, anyone who promotes or distributes model legislation would be required to register as a lobbyist. Under the measure, lobbyists and lawmakers would have to disclose any scholarship funds they get to attend events or meetings.

The measure would also apply to other national groups that push model legislation, that is, bills that are proposed and written outside of Minnesota and then tailored to the state.


Virginia legislators have spent over $230,000 traveling to ALEC conferences where they meet behind closed doors with corporate lobbyists and don't have to tell us a thing about it.

We've tried to get the records from those meetings, but even though our tax dollars paid for legislators to attend, the conference materials aren't public. Transparency and disclosure have always been the bottom line of Virginia government. So, we've worked with Senator Don McEachin to introduce SB1143, a bill that would require ALEC conference materials to be disclosed to the public if legislators spend our tax dollars to attend.

Oregonians have their own petition to force ALEC to register as lobbyists (ALEC is claiming it's a "charity.") The petition says:


We demand public disclosure on the workings of American Legislative Exchange Council (ALEC) in the state of Oregon and that ALEC operate within the rules established for lobbying organizations.

A state senator in New York, Daniel Squadron, has a petition to force lawmakers to disclose their ties to ALEC:


Since ALEC won't comply with lobbying laws, we're asking legislators to do it for them. If you're a state legislator or candidate for state legislature, sign this pledge to disclose whether ALEC helps shape any legislation that you introduce.

In Iowa, lawmakers are trying to pass a bill to enshrine No Rights At Work in the state constitution. Activists see ALEC's fingerprints all over it. They've drafted a petition demanding the bill's sponsors represent Iowa and not ALEC. You can sign that petition here.

Ordinary citizens are blowing the whistle on ALEC through individual efforts. For example, Judith Wiancko of Ennis, Mont., wrote a letter to the editor of the Billings Gazette denouncing ALEC:


There are members of ALEC in our Montana Legislature, working not for the people of Montana, but for corporations.

The Center for Media and Democracy is leading the fight to expose ALEC, the corporations and the billionaires behind it. Unfortunately, ALEC isn't the only shady group laundering big money in order to lower America's standard of living. CMD wants you to send an email to your U.S. senators asking them to investigate the Koch brothers, their sham corporations and dark money non profits.  You can start by going here.
Posted by Teamster Power at 11:41 AM