Meet the billionaires behind No Rights At Work 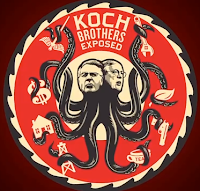 The Foundation supported the case against the Teamsters that resulted in Friday's court ruling that President Obama's recess appointments to the National Labor Relations Board were unconstitutional. The former showed up at a Pennsylvania news conference advocating a No Rights At Work bill:


Tuesday’s announcement was made at a news conference with about three dozen lawmakers, business officials, school board directors and political advocates, 20 of whom gave personal testimony on why they believe Pennsylvania should become a right-to-work state.

That included non-union member and public school employee Neil Weidman, and Mary Burkholder, a nurse and former union member. There was also a presence from the national right-to-work movement, including Justin Davis of the National Right to Work Committee.

We thought we'd expose the vast right wing conspiracy behind these groups. (You didn't think it was working people, did you?)  They are part of an interlocking, billionaire-funded network that has a staggering reach.

Castle Rock Foundation
Castle Rock, founded by the union-busting Coors family, gives money to more than 40 other billionaire-backed groups. (You can see them here.) Some of our least favorite phony think tanks and astroturf organizations are on the list: Dick DeVos' Mackinac Center, smear merchant Brent Bozell's Media Research Center and  Barre Seid and the Bradley's Scott Walker-loving Heartland Institute.

And of course the Coors help out the Benedict Arnold Koch brothers' ALEC, Cato Institute, Reason Foundation, Citizens for a Sound Economy, the Heritage Foundation, Landmark Legal Foundation, the National No Rights At Work Legal Defense Foundation. To name a few.

The money just sloshes around these groups.

Shelby Cullom Davis Foundation
Davis was an investment banker (charming) who set up the foundation to support many of the same anti-worker groups supported by the Kochs, the Coors, the DeVoses, et al. The foundation is thankfully defunct.

Jaquelin Hume Foundation
Hume was a right-wing, Ronald Reagan-loving California businessman who made his fortune in dehydrated garlic and onion. Hume tried to bust the union at his Basic Vegetables plant in 1999 -- members of Teamsters Local 890. Now his union-busting legacy lives on in the foundation.

Roe Foundation
Thomas Roe was a South Carolina businessman who founded Builder Marts. He also founded a group called the State Policy Network, an ALEC-lite organization that gets money from -- you guessed it, Castle Rock, et al. Andy Kroll at Mother Jones reported in 2011:


...the State Policy Network (SPN) is a little-known umbrella group with deep ties to the national conservative movement. Its mission is simple: to back a constellation of state-level think tanks loosely modeled after Heritage that promote free-market principles and rail against unions, regulation, and tax increases...

Founded in 1992 by businessman and Reagan administration insider Thomas Roe—who also served on the Heritage Foundation's board of trustees for two decades—the group has grown to include 59 "freedom centers," or affiliated think tanks, in all 50 states. SPN's board includes officials from Heritage and right-wing charities such as the Adolph Coors and Jacqueline Hume foundations. Likewise, its deep-pocketed donors include all the usual heavy-hitting conservative benefactors: the Ruth and Lovett Peters Foundation, which funds the Cato Institute and Heritage; the Castle Rock Foundation, a charity started with money from the conservative Coors Foundation; and the Bradley Foundation, a $540 million charity devoted to funding conservative causes.

The National Right to Work Committee is linked directly (of course) with the Attack Foundation.  It's a little more secretive than the Foundation. Our friends at American Rights At Work report,

A lawsuit revealed that 84 percent of the National Right to Work Committee’s 1973 budget was funded by corporations, and other employers.


Wofford Camp who served on a U.S. Chamber of Commerce committee and was a California grower who fought efforts by farm workers to organize unions.

Roger Milliken, former president of Milliken & Company, who shut down one of his southern textile plants as retaliation against his employees’ vote to form a union…

...the Committee’s first chairman of the board was Edwin Dillard, president of Old Dominion Box Company, who vehemently fought his workers’ efforts to organize his company’s plants in the South.9  Fred Hartley, the Committee’s first president, was the former Congressman who sponsored the Taft-Hartley Act amending the National Labor Relations Act to expand employers’ rights, not workers.