GOP election rigging: It's the only way they can win 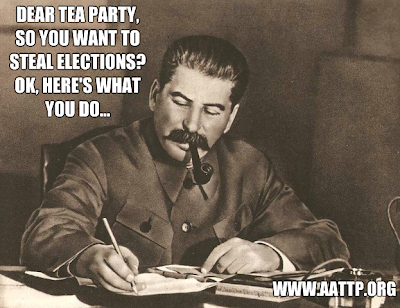 Chris Matthews says the only way the Republican Party will be able to win elections in the future is to rig them.

The party is in a quandary as it become obvious it represents a narrow class of plutocrats. Republicans who support workers -- like former Ohio Rep. Steve LaTourette -- are getting pushed out of the party as extremists take their place.

In November, the majority of American voters sided with Democrats, despite vast amounts of money thrown at Republican candidates from Mitt Romney on down.

So now the GOP is adding election rigging to its nasty bag of tricks -- a bag that already includes voter suppression.

John Nichols points out in The Nation that they're even admitting it.


Shaken by the overwhelming defeats of 2012—a 5 million popular-vote defeat in the presidential race, an Electoral College wipeout, the loss of two US Senate seats in a year where they had been expected to gain, a 1.4 million popular vote deficit in US House races nationwide and the loss of seven of eleven gubernatorial races that were in play—Republican National Committee chairman Reince Priebus has made it clear that he wants his partisan minions to use what power they retain to rig the electoral process.

We've told you one way they're doing it: gerrymandering. That's why states that President Obama won comfortably have state legislatures that are overwhelmingly Republican: Florida, Virginia, Ohio, Michigan, Wisconsin and Pennsylvania.

It's in those states where the next phase of election rigging is happening. ThinkProgress tells us:

That's what the Virginia state Senate tried to do on Inauguration Day. An angry Charles Pierce calls it "Jim Crow" in his Daily Politics blog in Esquire


This is a legislature acting to devalue African American voters to the advantage of white voters. This is Jim Crow bullshit, and no politician who deals in it, and no political party that continues to support said politician, is worthy of support by decent people in the year 20-goddamn-13.

...Sen. Charles W. "Bill" Carrico, R-Grayson, said the change is necessary because Virginia's populous, urbanized areas such as the Washington, D.C., suburbs and Hampton Roads can outvote rural regions such as his, rendering their will irrelevant.

Thank you, Senator "Bill," for making it plain.... the system is unfair because white people don't win any more. It's not like we shouldn't know it when we see it because it's not like we haven't seen this before.

Other devious methods have been used by Republican governors such as John Kasich in Ohio, Job-killer  Scott Walker in Wisconsin and Rick Scott in Florida. Kasich tried to eliminate early voting, Walker tried to shut down DMVs in Democratic districts and Scott limited early voting, resulting in long lines that disenfranchised 200,000 voters. In November, voters in Florida, Virginia, Ohio and other states waited in line for up to seven hours to cast ballots. Some voters were still in line in the early hours of Wednesday morning, long after the polls had closed.

Sen. Barbara Boxer, D-Calif., introduced an election reform bill, the LINE Act, to prevent long lines in federal elections. According to a statement, the bill:


...would help ensure that all American voters can cast a ballot in federal elections without enduring hours-long delays at their polling places. ..

(It) would require the Attorney General, in consultation with the U.S. Election Assistance Commission (EAC), to issue new national standards by January 1, 2014 regarding the minimum number of voting machines, election workers, and other election resources that are necessary to conduct Federal elections on Election Day and during early voting periods. The bill explicitly states that the goal of minimum standards is to prevent a waiting time of more than one hour at any polling place.

Senator Boxer’s bill also would require states where voters endured long lines to implement remedial plans to fix the problems before the next federal election. Under the legislation, the Attorney General working with the EAC would identify states that had a substantial number of voters who waited more than 90 minutes to vote in the 2012 election. Those states would have to comply with a remedial plan to ensure voters would not face similar delays in the future.