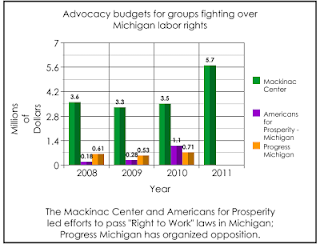 Michigan's nasty Mackinac Center is accused of breaking the law because it pretends to be a think tank when it's really a lobbying organization.

The Mackinac pushed for the No Rights At Work bills jammed through the Legislature's lame-duck session last year. It's funded by the usual anti-worker billionaires: the Benedict Arnold Koch brothers, Ponzi scheme Amway heir Dick DeVos, the Wal-Mart heirs and the Wisconsin-Job-killer-Gov.-Scott-Walker-loving Bradley Foundation.

Yesterday, Progress Michigan released an audiotape that it says proves the Mackinac Center isn't the non-profit it claims to be. F. Vincent Vernuccio, the Mackinac Center’s Director of Labor Policy, admitted to meeting with lawmakers to make a plan for ramming RTW laws through the Legislature. And wouldn't you know it, he was taking to the Koch-funded Americans for Prosperity phony tea party group.

In a statement, Progress Michigan said:


“It’s clear that despite calling itself a non-partisan think tank, the Mackinac Center has been intimately involved in lobbying Republicans to get their legislative agenda passed – and the worst part is, they’re doing it without even a minimal amount of transparency or disclosure.”...

While the Mackinac Center does not admit to lobbying to the federal Internal Revenue Service or the state of Michigan, emails obtained by Progress Michigan in 2011 indicated that the Mackinac Center was actively seeking to influence the legislative process on a series of bills related to health care benefits for teachers and other public workers.

Michigan law requires that any individual or corporation who lobbies must register with the Secretary of State and report lobbying expenditures. Lobbying is defined under Section 4.415 of Public Act 472 of 1978 as “communicating directly with an official in the executive branch of state government or an official in the legislative branch of state government for the purpose of influencing legislative or administrative action.”

In 2012 Congressman Sander Levin sent the IRS a letter asking them to investigate the tax-exempt status of the Mackinac Center after the revelation of a series of emails indicating “a long-term plan to lobby.” The Mackinac Center again checked the box on their 2011 Form 990 to the IRS indicating that they do not engage in lobbying activities.

You can hear the audiotape here.
Posted by Teamster Power at 12:57 PM