They fight for health care and against corruption. They take care of injured brothers. They help others in trouble, no matter how busy they are. They're teachers, leaders, fighters, negotiators, helpers -- and maybe even martyrs.

They're the union heroes our readers told us about. We asked for stories about these men and women on the Teamster Facebook page, and boy, did we get  a response!

The words in the headline are from Brother Jamie Murphy. He was describing his dad, a true union hero who may have been killed because he fought for what's rights. His story, and others, are below:


I'm employed at UPS and a steward for local 20 in Toledo, OH. Our BA would have to be my hero. He is a Vietnam vet and has been a Teamster forever. He always has time for us when we call, even though he has ALOT going on in his personal life. He has been on the national negotiating committee and is currently in Chicago negotiating the Central States rider. If I were in trouble and going to a hearing, I couldn't think of anyone that I would rather have argue the case. Roy Wheldon is a Local 20 icon and a Teamster hero in my eyes.


Hello. Steve Acheson from Manchester, England, is a living legend in the U.K. protesting about the Blacklist Scandal which is only now being addressed in the British media and mainstrem politics. He has protested outside the gates of Fiddlers Ferry power station for over 5 years on his own. He does more for electricians in the U.K. than any union official and does not get paid for it. Check out The blacklist support group pages of facebook and on my profile I have written a bedtime story for children about him. A TRUE CHAMPION and UNION HERO.


My heroes are all the officers and members of Steamfitter L U 449. On July 14 2010 I was critically injured in a steel mill explosion. From that moment till today they have stood by me and supported my family and I at every instant.


Some of the great old timers that had the patience to guide me as a young Teamster nearly 36 years ago. One of them was the late "Big Bob Flanders" He was born in Rutland VT to a prostitute in the 20's. He ran away from home when he was 16 and joined the merchant marines during WW2. Talk about a dangerous job with all the U boats in the Atlantic. Big Bob started hauling cars for Eastern Forwarding out of Buffalo NY in 1952. $99. bucks a load from Detroit to Boston in an old gas job Dodge tractor and a four car trailer. Went to work for Anchor Motor Freight in 1968. Bob had so many great stories. Some but not all were highway honey moonin' tails which I can't repeat.( which I can't repeat sober) He was one among a dozen old guys that hammered Teamster values into me. One thing I learned the hard way is you have to support your executive board an BA's whether you like them or not. Throwing out at election but don't bad mouth'em especially around an employer. Wish they were still around.... 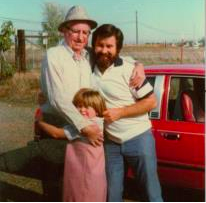 This picture is of my father, his father and me. Both were Union men along with all of my family. My dad was an iron worker, proud to be Local 118. He taught me so much with his moral compas as a Union Rep. Every Labor day we went to our local soup kitchen and served. Dad told me to show your gratitude for all you have -- you make it a verb and he did. He taught me about prevailing wages after he was arested yet again after a strike for Justice for Janitors. I recall asking him why it was so important to fight for them, they werent even Union. I will never forget him saying "Jai its about the right to a livable wage, and everyone, Union or not, deserves the right to a decent life. My dad wasn't a guy to tell people all the good he did. He just did it. To list a few: the weeks in Mexico for Habitat for Humanity; we alway helped the widows, not for a few weeks after their men went in the Hole but a few years. The biggest battle was when a contractor had been screwing with some guy's earnings and when they would go to cash out for their pension after working for this company for years it wouldn't show up. They would have 5-10 years of work not showing. There were death threats and bribes on the table for my dad to not testfy. I wil never forget me asking dad to please stop. I was afraid he would get hurt. He just smiled and said "Jai, what's the worst that can happen? I die. Tough shit. Put me in a fifty gallon drum and drop me in the sea." I got it then. Fighting for the Union wasnt a job but his life. Dad was nothing less than a new age freedom fighter. A few years back, dad's plane disappeared. We lost him and his twin brother Joe Murphy, a Union fighter for the electricians as well; and some other good union men, and Eric the young pilot. Was it related to dad's death threats? Perhaps, but fear never stops a Union man from doing what's right.


Workers at SuperValu in Minneapolis fought for healthcare, which I needed! Solidarity with my Teamster family! You helped me walk again.


...my late Father was a lifetime Teamster out of Los Angeles and Tulsa. He met Jimmy Hoffa in the late 40s or early 50s. So in my house, it was Jesus Christ and Jimmy Hoffa, and not necessarily in that order! I saw how the Union worked for the workers and I learned early that a scab is one who reaps the hard work of the Union, when the Union has no need of scabs. My father was the hero because in all his life, he only had two jobs after the Navy in WWII until his retirement in 1986. He dared never to work in a job without the Teamsters. He was a Union Steward in Los Angeles at the Overland Warehouse for Union Pacific railroad. They wanted him to be a foreman and he was for a couple of months. What he heard from the company showed him that the company didn't care at all for the workers. So he resigned and went back to the Union as quickly as he could. I learned from him the value of a Union, which is more of America than any political party.

Posted by Teamster Power at 5:51 PM