Hundreds of Michigan citizens are arriving in Lansing right now for a rally to send a message about Gov. Rick Snyder: You can't trust him to tell the truth about working families. A large red-and-white banner has been unfurled on the Capitol steps that says, "You Can't Trust Snyder."

Snyder's big lie, of course, is that No Rights At Work will improve workers' lives. Instead, it will lower the standard of living for most Michiganders, increase poverty, weaken workplace democracy and injure more people on the job.

Snyder's smaller lie was that No Rights At Work wasn't on his agenda last year. Then during the lame-duck session he held a news conference to say he'd support the bill, rammed it through the Legislature with no public input and then signed it as thousands protested outside and hundreds of police officers stood by. 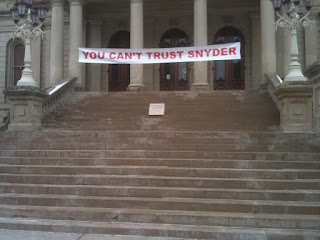 Michigan state police are lined up outside the Capitol even now as Snyder is scheduled to deliver his State of the State address this evening.

(btw, It doesn't speak well of political leaders who require large numbers of law enforcement officers to protect them from the people they're supposed to, you know, represent.)

Kristen Daum, a Lansing State Journal reporter, is tweeting details and photos of the rally (@kristendaum).

So is Joe LaFurgey, a news reporter at WOOD-TV (@joelafurgey). He reports that many protestors say they lost trust in Gov. Snyder after he signed RTW.

Earlier today, UAW President Bob King said Michigan's right-to-work-for-less laws will be overturned -- and some of the lawmakers who voted for it will be voted out of office.