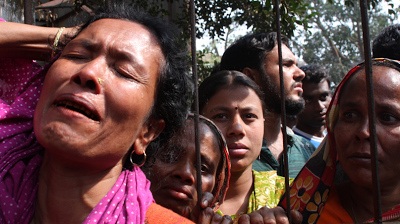 The recent death toll is now at 119 in Bangladesh sweat shops that produce clothing for U.S. and European markets.


Bangladesh's government has ordered an investigation into allegations that the sole emergency exit was locked at a garment factory where a fire killed seven female workers, an official said Sunday.

The fire Saturday at the Smart Export Garment Ltd. factory occurred just two months after a blaze killed 112 workers in another factory near the capital, raising questions about safety in Bangladesh's garment industry, which exports clothes to leading Western retailers. The gates of that factory were locked.

A labor rights group said the victims were crushed to death. Reuters reported,


...the Institute for Global Labour and Human Rights (ILGHR), said on its website it had gained access to the gutted factory and found seven women workers had been crushed to death as employees tried to escape the fire.

A Spanish retailer is known to have done business with Smart Export Garment, reports Bloomberg:


Apparel sold by Inditex SA (ITX), a Spanish company that owns Zara and helped pioneer faster fashion cycles, was found at a factory that caught fire on Jan. 26, killing at least six people.

"After more than two decades of the apparel industry knowing about the risks to these workers, nothing substantial has changed," the Executive Director of the International Labor Rights Forum, Judy Gearhart, said in a statement issued along with The Worker Rights Consortium (WRC) and the Clean Clothes Campaign (CCC).

"Brands still keep their audit results secret. They still walk away when it suits them and trade unions are still marginalized, weakening workers' ability to speak up when they are at risk," she added.


...since 1990 over 1000 workers have died in preventable factory fires and other unsafe workplace incidents in Bangladesh alone. Over 700 of those deaths have occurred since 2005. Sixty percent of Bangladesh’s garment factories lack adequate fire-fighting tools and many factories do not have emergency exits.

Even though the death toll in Bangladesh’s export-oriented garment industry keeps rising, US apparel companies continue to send increasing numbers of orders to Bangladesh.

Wal-Mart recently sent a letter to its suppliers saying it had zero tolerance for contractors that used unauthorized subcontractors, according to The New York Times:


Wal-Mart Stores told its worldwide suppliers Tuesday that it was adopting tougher rules on fire safety at its contractors and would have “zero tolerance” for suppliers that used unauthorized subcontractors...

In a letter sent to its suppliers on Tuesday, Wal-Mart said they must “fully and accurately disclose” in advance any factories they or any of their subcontractors plan to use. Under the policy, suppliers will be subject to termination even if an undisclosed factory is used “without the supplier’s knowledge” by anyone in the supplier’s supply chain...

Wal-Mart also announced tougher requirements on fire safety, saying “facilities found to have fire safety-related violations must initiate corrective actions immediately.” The company said that the repairs must be completed no later than 30 days after the violations were identified.