Walker's anti-union law could still be struck down 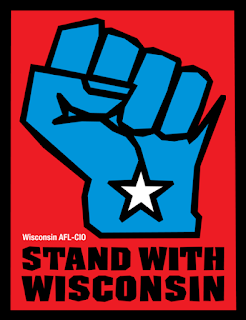 The bad news yesterday was that a federal appeals court upheld Job-killer  Gov. Scott Walker's union-busting Act 10. The good news is that it could still be struck down because (a) it can be appealed and (b) two other legal challenges are moving through state courts.


While Friday's 2-1 ruling by a panel of the 7th Circuit could influence the state appeals court and others hearing the cases, it's not binding, said Paul Secunda, a Marquette University law professor. It certainly doesn't signal the end of the legal fights, he said, and it could be appealed to the full federal appeals court and the U.S. Supreme Court.

"The public unions will fight until every one of their arguments are considered in full," Secunda predicted.

In one of the other two cases, Madison Teachers et al vs. Scott Walker, a Dane County Circuit Court judge found five provisions of Act 10 unconstitutional. The Progressive explains:
That case is now on appeal.

The second case was filed in November by the Wisconsin Law Enforcement Association. Reports The Progressive,


This lawsuit may be even stronger than the MTI and Public Employees Local 61 case since it involves members of the very same union being treated differently under the law.