Courts uphold No Rights At Work in Wisco, Indiana 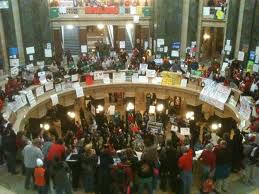 There's an ill wind blowing from the Midwest today.

In Wisconsin, the court today upheld the politically motivated Act 10, Job-killer Gov. Scott Walker's notorious law that strips collective bargaining rights from government workers. That hurt especially, because parts of that law had been struck down.

We learn the courts in Indiana yesterday upheld the politically motivated No Rights At Work law passed last year.


The court acknowledged the rationale behind Gov. Walker and the Republicans' attacks on worker rights was to gain partisan political advantage – just like their gerrymandering of legislative districts and restricting voting rights. Republican Senate Majority Leader Scott Fitzgerald’s boast that Act 10 was designed to prevent President Obama from winning Wisconsin’s Electoral College votes were specifically cited as unseemly.

It is extremely disappointing that the result of this court’s majority decision is to continue to allow those with political power to attack the people and their rights to organize for safe working conditions, a more secure economic future and to elect representatives that will fight for them.

Here's more about the decision, from The Business Journal:


The Wisconsin law limiting public employee’s collective-bargaining rights was upheld in a Friday decision by a federal appeals court.

The decision is the latest among the long-running legal battles between public employee unions and the state of Wisconsin over the controversial budget repair bill approved in March 2011. The U.S. Court of Appeals for the Seventh Circuit on Friday upheld the law in its entirety, reversing a lower court’s decision to invalidate parts of the law.

U.S. District Court Judge Philip Simon in Hammond ruled that none of the union's arguments against the law could succeed in federal court, although a challenge could still be made in state courts.

The International Union of Operating Engineers Local 150 filed the lawsuit last year trying to block the law, which bans contracts between companies and unions that require workers to pay union representation fees. The legislative fight over the Republican-backed law led to boycotts by Democratic lawmakers during the 2011 and 2012 sessions.

The union argued in the lawsuit that the right-to-work law contains multiple violations of both the state and federal constitutions, including a contention that the law interferes with the union's free speech rights by stifling the collection of money that helps pay for its political speech.