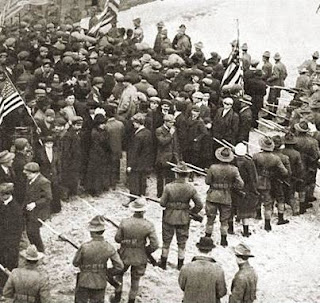 On Jan. 11, 1912, the Industrial Workers of the World organized the “Bread & Roses” textile strike in Lawrence, Mass. The 10-week strike involved 32,000 women and children. It ended in victory.

The first workers to walk out were Polish women who, upon collecting their pay – which had been reduced – exclaimed that they had been cheated and promptly abandoned their looms.

The terrific Bread and Roses 1912-2012 Facebook page tells us the strike wasn't spontaneous:


The 'Bread & Roses Strike' started on the morning of Jan. 11, 1912. It was not, as some tell it, a spontaneous walkout over reduced wages. The pay cut was the flashpoint, but years of terrible working conditions, substandard housing, grinding poverty despite laboring 60 hours a week, and devastating infant and child mortality rates were the stuff of the strike. In addition block-by-block neighborhood organizing had taken place for months in advance of the new year. Workers had had enough and they were ready!

These things happened in the days and months before the strike started:


• On January 9, a fourteen–year-old boy had his leg crushed in an elevator at the Arlington Mill; he died the next day.
• A worker from the Wood Mill on Saturday January 6 walked into a store on Essex Street and dropped dead. Stress, factory fatigue, TB, who knew, and who cared?
• From Bruce Watson’s Bread & Roses: “Diseases now easily cured—diarrhea, measles, whooping cough, croup—killed hundreds, most of them children. During the year preceding the strike, 1,524 people died in Lawrence. Almost half were under the age of six, and more than 500 had not yet reached their first birthday.”

Wikipedia offers this historical factoid about the strike (something we can all relate to):


To circumvent an injunction against loitering in front of the mills, the strikers formed the first moving picket line in the US.

The slogan "Bread and Roses" comes from a poem by that name by James Oppenheim:


As we come marching, marching, we battle too for men,
For they are women's children, and we mother them again.
Our lives shall not be sweated from birth until life closes;
Hearts starve as well as bodies; give us bread, but give us roses!

There's plenty of information online about the strike and how we hear its echoes today. Go here, here, here and here.
Posted by Teamster Power at 12:24 PM