Fix the Debt is full of crap 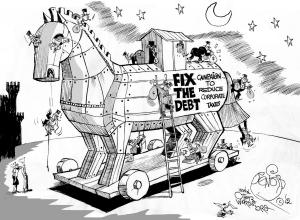 Fix the Debt, a front group for billionaires and CEOs, says their goal is to cut the federal deficit.

They don't give a rat's ass about the debt. But they're lobbying hard to cut your Social Security.

The CEOs who are part of Fix the Debt want tax breaks, government contracts and freedom to plunder the middle class.

Take Lloyd Blankfein, CEO of the great vampire squid wrapped around the face of humanity, relentlessly jamming its blood funnel into anything that smells like money Goldman Sachs. Blankfein says working people will just have to get used to receiving fewer of the Social Security, Medicare and Medicaid benefits that they earned.

Fix the Debt actually says it's concerned the U.S. is risking another economic crisis. If that's so, we don't understand why they let Blankfein into their club. Goldman Sachs' recklessness and dishonesty was a major cause of the last economic crisis.

Here's how much Goldman Sachs is willing to share the sacrifice of fixing the debt: In the latest budget deal signed into law on Jan. 2, Goldman Sachs got a sweetheart tax deal for its fancy new headquarters in New York. And Goldman Sachs paid 1.1 percent of its income in taxes in 2008, the year that it got $800 billion -- yup, with a "b" -- from the Federal Reserve.

Or take Jim McNerney, CEO of Boeing. Boeing wouldn't exist without government defense contracts or the government-run National Air Space. Of course cutting defense spending isn't on Fix the Debt's agenda, though cutting Social Security is. And as Public Accountability Initiative points out,

Finally, if the Fix the Debt hypocrites really cared about the deficit they'd be working to create good jobs. As the peerless Dean Baker points out,


There are no businesses that are going to hire additional workers because the government laid off school teachers or firefighters and we cut back spending on food stamps. Businesses hire more workers when they see more demand for their product. All of these actions that reduce the deficit, either on the spending or tax side, translate into less demand and therefore less employment. In short, those who want to cut the deficit now are lobbying for fewer jobs and higher unemployment.

Salon brings us five "Fix the Debt" CEOs who destroyed 108,000 U.S. jobs in the past five years. They are:
So there you have it. Fix the Debt is nothing more than a poster child for hypocrisy and greed.
Posted by Teamster Power at 12:13 PM