You can see a cool video of the building here. 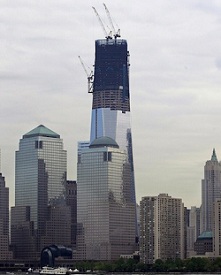 
The reconstruction of the World Trade Center was done almost entirely with union labor. More than 3,200 workers were involved in the reconstruction effort, and as American Rights At Work notes, labor unions have been connected to the site since 9/11: