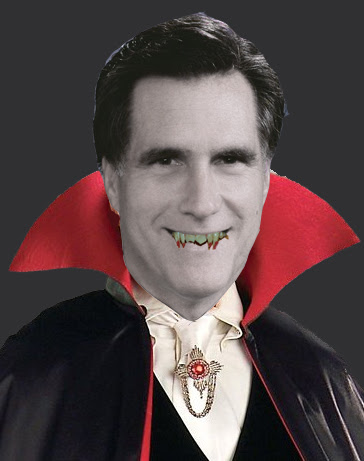 There’s been a lot of talk about capitalism lately – the blood-sucking kind in particular.

Headlines this week have been dominated by the debate over Mitt Romney’s background at Bain Capital and its relevance in the 2012 election.

Earlier in the week President Obama made the case that the attack on Bain is fair game:


This issue is not a, quote, distraction -- this is part of the debate that we're going to be having in this election campaign… [Romney’s] not going out there touting his experience in Massachusetts. He's saying, I'm a business guy…When you're president, as opposed to the head of a private equity firm, your job is not simply to maximize profits.

Rachael Maddow on MSNBC pointed out that “the issues of Mitt Romney’s tenure in the private sector, the years that he spent at Bain Capital…have actually been made central by both the Republicans and the Democrats.”

Workers speak for themselves in the Obama campaign’s recent ad about a Kansas City, Mo., steel mill that fell victim to Romney’s brand of blood-thirsty capitalism. Said steelworker Jack Cobb:


It was like a vampire. They came in and sucked the life out of us. Bain Capital walked away with a lot of money that they made off this plant.


We view Mitt Romney as a job destroyer.

It’s obvious why this debate about private equity matters for working people. What’s less clear is why Romney wants to talk about it – until you take into account how detached Mr. 1% is from ordinary Americans.

Mitt thinks his experience as a predatory private equity mogul is actually something to be proud of. But vampire capitalism is not something that most Americans – the 99% – look toward with admiration.

Why? Because it was the same type of reckless and ruthless capitalism that brought on the 2008 financial crisis and which continues to hurt working families today.

A piece by Demos co-founder David Callahan in the Huffington Post yesterday explains how Romney’s profit-making credentials at Bain were based on the creation of bad debt.


Borrowing lots of money and incurring bad debts is not how real businesses make money in a normal world. But we don't live in such innocent times. Modern American capitalism is rife with sophisticated financial intermediaries who exploit flaws and complexity in the system, as well as insider connections, to make profits off of predatory behavior – which [is]… why the attacks on Bain Capital are both accurate and fair.

Remember all of those weird financial instruments people were talking about in 2008? Credit default swaps, derivatives, and – your eyes are probably already glazing over. Romney’s Bain is tied to those very shadowy Wall Street dealings.

And Bain isn’t alone. Executives at companies like Hostess have taken lessons from the Romney business playbook, looting the company and using Chapter 11 bankruptcy to threaten the livelihoods of its Teamster workforce. American Airlines is doing the same to its union workers – and Bain is directly involved in that anti-worker assault.

Back during the height the financial crisis, Rolling Stone columnist Matt Taibbi powerfully described Goldman Sachs and other forces that nearly pushed the entire global economy off a cliff.


The world's most powerful investment bank is a great vampire squid wrapped around the face of humanity, relentlessly jamming its blood funnel into anything that smells like money.

JPMorgan’s recent $2.3 billion blunder reminds us that the vampire squid is alive and well on Wall Street.

And Romney reminds us that it is trying to wrap its tentacles even tighter around Washington.
Posted by Teamster Power at 4:38 PM