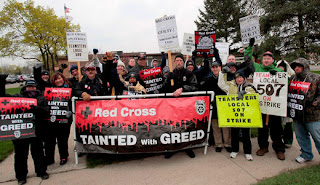 The City of Cleveland gets it: Just because you're a nonprofit doesn't mean you aren't greedy. The Cleveland City Council voted unanimously on Monday to support Teamsters Local 507 members striking Red Cross.


...passed a resolution supporting the strike by 400 blood collection workers at Northern Ohio Red Cross. The action followed similar resolutions in Toledo and Lansing, Mich., where strikes against Red Cross are also under way.

The strike by Teamsters Local 507 in the Northern Ohio region, based in Cleveland and covering 19 counties, is now in its fourth month. The unions in all three locations charge the agency is stonewalling talks and seeking unilateral power to alter negotiated contracts, especially in health care plans.

"Our members are committed to retaining their collective bargaining rights as much as they are committed to providing caring service to donors who visit the blood drives," Mike Parker, Principal Officer of Teamsters Local 580 in Lansing, said. Parker charged that Red Cross is also stifling negotiations and is offering only six hours of talks and then not until June 19.

"By the time June 19 rolls around, our members will have been on strike 11 weeks."

Our sister Kathy Greene, proud member of Teamsters Local 507, had earlier spoken to a meeting of the Cleveland AFL-CIO. She told them she travels up to 100 miles from her home to staff blood drives. One site had no air conditioning on a 90-degree day and she had to prevent her staff from passing out. Understaffing creates a big risk of errors caused by fatigue. Said Sister Kathy:


I don't know about everyone else, but would you want someone to come at you with a big needle that has not had anything to eat or drink in hours? Not me!

And before you read more of her comments, remember Red Cross CEO Gail McGovern took home more than $1 million in pay last year.


Over these past 12 weeks we have been told: "if you don't like your job quit!" Our response to that is we do love our jobs. That's why we are out here fighting for them. All we want is respect and a fair wage! I would like to know that the American Red Cross sees each of us for who we really are-hard-working, dedicated people who understand the mission of the Red Cross. But do they? This is supposed to be a great humanitarian organization that strives to help others. What about their employees that can't afford their medical bills, can't afford to put gas in their cars so they can drive more than a hundred miles to work? What about the families who have to find a sitter to watch their kids at 4am? A fair wage, good medical and working with us on our schedules would be a reward for our blood, sweat and tears.

The strikers are going through tough times. Donations of gift cards for food, gas and money can be sent to  Red Cross Strikers, c/o Teamsters Local 507, 5425 Warner Rd., Unit 7, Cleveland, OH 44125.
Posted by Teamster Power at 9:55 AM