This loony billionaire hates government spending unless it's for him

Joe Ricketts is contributing a small fortune to attacks on President Obama, alleging his "overspending" of taxpayer money. Note:  deficit spending under President George W. Bush was three times as high as under Obama.

One guess as to where Ricketts does want the government to spend taxpayer money. Hint: he owns the Chicago Cubs.

Yup, Ricketts think taxpayers should pony up for a new ballpark for him rather than roads, schools or police protection.


This week, the New York Times reported that Joe Ricketts, a right-wing billionaire and founder of TD Ameritrade, is soliciting multi-million dollar ad proposals to attack President Obama. One such proposal, leaked to the paper, was a $10 million, racially-charged campaign entitled “The Defeat of Barack Hussein Obama: The Ricketts Plan to End his Spending for Good.” The proposal, which center on Rev. Jeremiah Wright, suggests hiring an “extremely literate conservative African-American” to break down Obama’s image as a “metrosexual, black Abe Lincoln.”

(The immortal words of Joseph Welch come to mind: "Have you no sense of decency?") 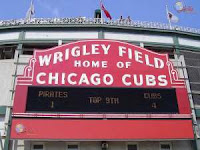 Anyhoo, Ricketts backed off the plan after it was exposed. But he hasn't backed off his plan to soak Chicago taxpayers for $150 million right off the bat. Crain's Chicago Business reports:

...$300 million is needed for the ballpark proper.

Half would come from the team, presumably in increased revenue from more signage inside Wrigley and retail and other entertainment...

And half would come from $150 million or so in bonds to be retired with increased revenue from the existing city and Cook County amusement taxes on ticket sales. Specifically, debt service would get the first 6 percent in growth above a base level of around $15 million a year now...

The team also wants a 50 percent cut of any increase in amusement tax revenue growth above 6 percent. And unlike the bonds, which would be retired in 30 or 35 years, that would be forever.