The election to recall Wisconsin Gov. Scott Walker is going to be close on Tuesday. Polls are showing Milwaukee Mayor Tom Barrett is gaining. Our brothers and sisters in Wisconsin are working hard to get as many voters to the polls as possible.


Have you made your voting plans for June 5th yet? Cmon, every voting age person in the state is going to vote in this one!!! wouldn't want to be left behind, would you?


Lost timer Tyler has over 1000 mi on car doing member to member across #Wi. He's hitting it hard! Keep it up! #wiunion

Teamsters from Local 200 were out last weekend at a get-out-the-vote rally. Here are Tom Bennett and Tom Millonzi with Milwaukee Mayor Tom Barrett, who hopes to unseat Walker in just six days: 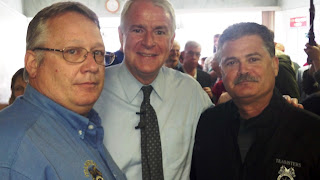 And here's Tom Millonzi with Mahlon Mitchell, the head of the Wisconsin firefighters union. Mitchell is running for Lt. Gov. against Rebecca Kleefisch: 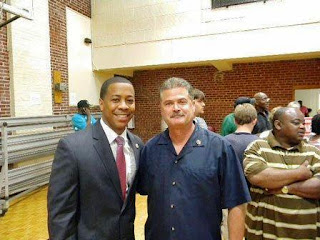 They were at a get-out-the-vote rally in Racine.

We know our brothers and sisters in Wisconsin are getting tired, but there are only six more days to go!
Posted by Teamster Power at 4:31 PM