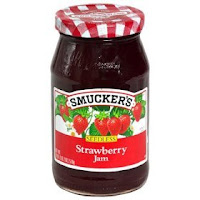 Local 436 is not happy with the way things are going at Smucker's. We'll let them tell you what's happening. Here's their statement:

More than 270 Teamsters who work at the J.M. Smucker Company announced today that they may strike the Orrville, Ohio jelly maker.

The workers, represented by Teamsters Local 436 in Cleveland, have been trying to negotiate a new collective bargaining agreement for months, but Smucker’s is insisting on eliminating senior workers’ rights, which the company claims is necessary to operate their new plant.

“We have union members with 30 years of service and experience at Smucker’s and all of a sudden this company wants to strip them of their seniority in a layoff – that is simply unfair and wrong,” said Gary M. Tiboni, President of Teamsters Local 436.

He added that the company is building a $150 million, state-of-the art facility to make its jellies and jams. “There is no reason that a successful company like this should put the jobs of its most loyal, long-service employees at risk,” Tiboni said.

“I have been employed by Smucker’s since 1975. Our union has always worked with the company to make changes when the business changed. Now they are asking me to give up my seniority when they make changes,” said Kevin Wyler, Chief Steward.

The union and the company have had a labor contract for many years. The current agreement expired on May 5, 2012.

The union has offered to extend the current labor agreement for two years with no changes or raises, giving the company enough time to realize their operational needs in the new plant and the union a clear picture as to what works for both sides. But the company has rejected that proposal.

Posted by Teamster Power at 5:21 PM