Teamster Micky 'The Fighter' Ward's new book is out 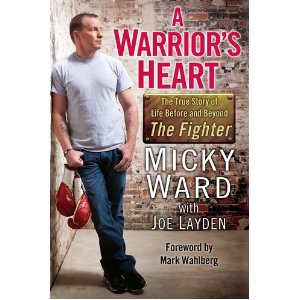 You may have seen "The Fighter," starring Mark Wahlberg and Christian Bale. The movie is about Ward (Wahlberg) and his trainer-brother Dick Eklund (Bale), from their early days on the rough streets of Lowell, Mass., through Eklund's battle with drugs and Ward's eventual world championship in London. Watch the trailer here.

Here's what the book is about, according to Amazon:


With the success of the critically-acclaimed, Academy Award-winning film “The Fighter,” the world stood up and cheered for the inspiring true story of Micky Ward—a heart-and-soul warrior who overcame the odds to make history in the ring. But that was only part of the tale.

Now, in his own words, “Irish” Micky Ward tells his inspirational life story as only he can.

From his first bout at the age of seven, Micky Ward was known first and foremost for giving as good as he got, and for leaving absolutely everything he had in the ring. When he fought, quitting was never an option. It was that indomitable spirit that would allow him to survive, battle against, and overcome the harsh realities that he faced every day of his life.

For it was outside the ring that Ward’s heart would be most needed, from witnessing his idolized older half-brother Dicky fall from grace, to dealing with his wildly dysfunctional—if frighteningly loyal—family, to the darkest of secrets that he has never revealed until now, and the numerous setbacks and defeats that would have stopped a lesser man. Micky Ward has remained a fighter, through and through—both as a professional boxer, and as a man who finally found his greatest strength in friendship, family, and faith in himself.

He is now a proud member of Teamsters Local 25. Many Teamsters will remember Ward's appearance at the Teamsters convention in 2011.

Posted by Teamster Power at 1:21 PM