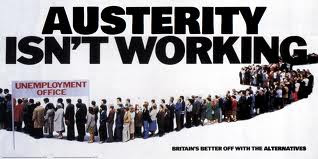 Cutting social services (but not corporate giveaways and interest payments) is killing jobs in Spain, Greece, the UK, Wisconsin and wherever else austerity is taking hold.
A recent analysis of government belt-tightening in Europe came to that exact conclusion. Here Martin Wolf at the Financial Times (not exactly a Socialist rag) looks at the 17 European countries that adopted the euro. His conclusion:

The Decisions Based on Evidence blog took the analysis a step further and concluded:


...if you are looking for “job-killing programs” look to austerity programs during an economic downturn.

The International Labor Organization agrees. Last month it predicted 202 million (yup, million) people around the world would be unemployed because of austerity. Reports the Canadian Press,


In a gloomy forecast, the International Labor Organization predicted unemployment, which stood at 196 million at the end of 2011, would edge up further in 2013, with the long-term unemployed and young people hit particularly hard.

The "narrow focus of many eurozone countries on fiscal austerity is deepening the jobs crisis and could even lead to another recession in Europe," said Raymond Torres, the report's lead author.