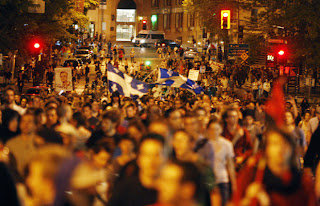 The massive student strike in Quebec, now in its fourth month, has taken the policies of austerity head on as more than 100,000 students protest against student fee hikes in the province. But now the Canadian government is instituting the most chilling crackdown on the right to protest in North America with its recent enactment of Bill 78.
As the Legal Committee of the Coalition of the Association of Student Union Solidarity (CLASSE) wrote in a statement:

Among other draconian elements brought forward by this law, any gathering of 50 or more people must submit their plans to the police eight hours ahead of time and must agree to any changes to the gathering’s trajectory, start time, etc. Any failure to comply with this stifling of freedom of assembly and association will be met with a fine of up to $5,000 for every participant, $35,000 for someone representing a ‘leadership’ position, or $125,000 if a union – labour or student – is deemed to be in charge.

We’ve seen similar attempts to stifle protest in the U.S. In March an ALEC-inspired anti-union, anti-picketing bill was defeated in Georgia thanks to a coalition of groups, including labor and Tea Party activists. Teamsters Local 728 led that fight, using social media to build opposition to the bill.

But Bill 78 is already the law in Quebec. It’s a draconian assault on democracy and free speech that has dangerous implications for students and workers in Canada. Right now, 4,800 Canadian Teamsters are preparing to strike at Canadian Pacific rail. Of course, Bill 78 won’t affect those workers directly, but an alarming precedent has been set.

As CLASSE said in its statement:


One cannot view this law in isolation. In the past few months, the Québec student movement – inspired by Occupy, the Indignados of Spain, the students of Chile, and over 50 years of student struggle in Québec; and presently at North America’s forefront of fighting the government’s austerity agenda – has been confronted by precedent-shattering judicial and police repression in an attempt to force the end of the strike and our right to organize collectively.

…[O]f particular concern for those of us involved in the labour movement is that anti-strike forces have filed injunctions systematically from campus to campus to prevent the enactment of strike mandates, duly and democratically voted in general assemblies.

The Quebec students have vowed to continue their strike in defiance of Bill 78.

They got some high-profile support last weekend on Saturday Night Live. Arcade Fire band members, playing behind Mick Jagger, wore red squares to show their solidarity with the students.

Posted by Teamster Power at 1:45 PM