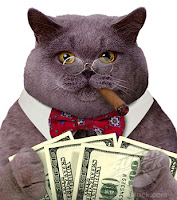 Wanna know why mega-bankster JPMorgan Chase can make stupidly risky trades that threaten the stability of the global economy?

Apparently it's because their oversight of risk management couldn't suck enough. The bank's risk management committee consists of a museum head who also oversaw AIG, the grandson of a billionaire and the CEO of a company that makes flight controls and work boots.

The billionaire's grandson, James Crown, is the only one with any Wall Street experience. That was 25 years ago.

Bloomberg News has the story. The two other amateur risk managers on JPMorgan's committee are Ellen Futter, president of the American Museum of Natural History in New York, and David Cote, CEO of Honeywell International Inc. Reports Bloomberg:


JPMorgan, with $1.13 trillion of deposits, is the only one of the six largest U.S. lenders that doesn’t have a former banker, regulator or finance professor on its risk committee.

Futter joined AIG's board after the company's CEO donated $36.5 million to the museum but resigned before AIG took a $182.3 billion bailout from you and me the federal government.  Futter received personal loans from JPMorgan and $245K last year for her bush league work on the board.

Crown was paid $300,000 for failing to oversee JPMorgan's risk management activities, though he doesn't need it. His grandfather was a billionaire. Those 1 percenters gotta stick together.

The Teamsters, through our Change to Win federation and CTW Investment Group, are fighting JPMorgan's lax oversight of risk. After all, it's the kind of thing that could bring down the economy  -- again. Reports Reuters,


A labor-backed investor group critical of JPMorgan Chase & Co's corporate governance said the bank has failed to address concerns over its risk oversight and it will try to rally other shareholders for changes after a $2 billion trading loss.

CtW Investment Group, which advises labor pension funds holding what it said are 6 million shares in JPMorgan, has advocated for risk governance changes there for more than a year. The risk policy committee of the bank's board lacks the expertise to understand risks the bank is taking...

It's a tough job, but someone who's qualified has got to do it.

Posted by Teamster Power at 1:54 PM