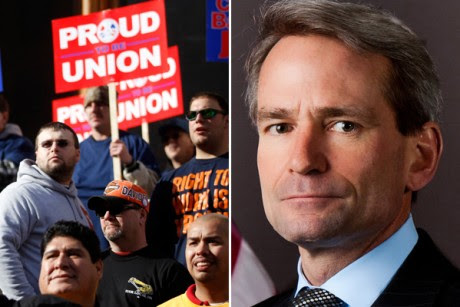 The National Labor Relations Board announced on Sunday that Republican board member Terence Flynn submitted his resignation.

Flynn got caught leaking internal documents and early drafts of board rulings to the Mitt Romney campaign. That adviser, former NLRB chairman Peter Schaumber, was appointed by George Bush to the board.

The board’s inspector general (its watchdog) released reports of Flynn’s misconduct back in March.  The inspector general also revealed Flynn leaked documents to another former board member who now works for the not-exactly-labor-friendly National Association of Manufacturers.

Flynn denied any wrongdoing and didn’t even mention the ethics scandal in his resignation letter. But a statement by his lawyer at least admits Flynn may not have exercised “perfect judgment.”
According to Steven Greenhouse in the New York Times,


In one instance, Mr. Berry [Flynn’s lawyer] found that Mr. Flynn had secretly helped Mr. Schaumber write an opinion column that denounced an NLRB decision that favored labor unions. Mr. Berry called that action by Mr. Flynn "an abuse of his discretion."

Yesterday, NLRB chairman Mark Pearce and other board members released a joint statement to staff calling the Flynn controversy a distraction from the agency’s mission:


Such distractions shall not tarnish this agency’s image – an image created from the good and honest work of its employees…We are moving quickly to put the distractions of recent weeks behind us and to return the focus to where it belongs – on the issues and cases that American workers bring to us every day.

Flynn remains under investigation by the Justice Department and the Office of Special Council for violations of the Hatch Act. His resignation will leave the board with a 3-1 partisan split.

Given that Flynn was a plant for Romney and the 1%, his departure from the NLRB is good news for workers. After all, Romney doesn’t have a high opinion of the labor board, which he says is stacked with “union stooges.”

Presumably, if Mr. 1% had his way, the board would be stacked with Wall Street stooges.
As David Dayen wrote at FDL:


[The Flynn scandal] is a decent reminder of the Bush years, and how federal appointees at that time saw their role as aiding the conservative movement rather than performing their job adequately.

Posted by Teamster Power at 9:58 AM