Just when you thought it couldn't get any worse. Karoli at Crooks and Liars was pretty steamed about the latest intimidation tactics from the Job-killer Frequent liar Gov. Scott Walker troglodytes people. 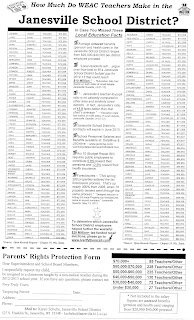 The flier at left was inserted into Janesville Gazette newspaper tubes, against the wishes of the newspaper. Karoli calls it "thuggery in typeset letters:"

This is part of the strategy the Heartland Institute laid out for breaking the teachers' union and holding onto the their water boy, Scott Walker. According to Blogging Blue, this is part of an intimidation strategy to suppress enthusiasm, free speech, and the right to have a voice in one's government. Cognitive Dissidence outlines the strategy as outlined in Heartland's 2012 Funding Plan, released in January:

The recall elections of 2012 amount to a referenda on collective bargaining reform at the state level ... Successful recalls would be a major setback to the national effort to rein in public sector compensation and union power. ...

We are contemplating five projects:

We anticipate that this project will cost about $612,000.... The anonymous donor has pledged $100,000 toward this project. We are circulating a proposal to other potential funders. 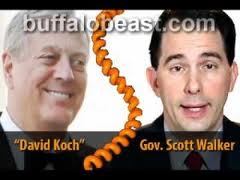 Isn't that charming? Some coward with $100,000 to spare to attack middle-class teachers hides behind a phony non-profit to do his dirty work.

Meanwhile, Walker's people are sounding desperate. They've begged Californians to send money urgently to get out the vote for the June 5 recall. According to Politico,


A political group supporting embattled Wisconsin Gov. Scott Walker is raising money from California weeks before Wisconsin voters will go to the polls for the special recall election. According to a fundraising solicitation obtained by PI, the Wisconsin Recall Action Fund is asking for “urgent” out of state help to boost the group’s coffers before June 5. “If Governor Walker is defeated this June, President Obama will have the critical win that the national media and liberal Democrats need to begin turning the tide of the president’s reelection”...