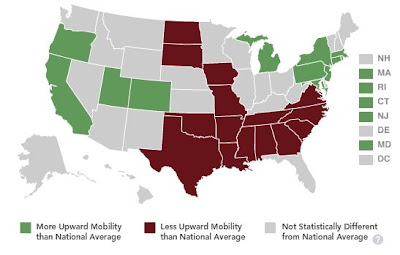 If you were born into poverty, you're way more likely to stay poor in non-union states, according to a new study by the Pew Charitable Trusts.

Corporations know this already. That's why they're pushing right-to-work-for-less (and Mitt Romney). They want cheap labor. They want you to be poor.

The ability of American workers to be upwardly mobile in the economy depends heavily on where they live, according to a state-by-state analysis from Pew Charitable Trusts. The study, the first of its kind, found that workers in a group of states largely clustered in the Northeast and Midwest are more likely to achieve upward mobility, while workers in southern states are far less likely...

Every state but one (Utah) that outperforms the national average on relative mobility, defined as the percentage of residents starting in the bottom half of the national distribution who move up 10 or more percentiles in a 10-year period, is a union state. Meanwhile, 14 of the 15 states that come in below the national average are right-to-work states, with Missouri the only exception.

What Business-Friendly means to workers.

You working Longer hours at Low wages with No health benefits or pension.

No vacations or sick pay and most certainly no say. you can be canned at anytime for absolutely no reason.

What Business-Friendly means to Romney and his ilk.

Low, preferably NO taxes on the wealthy and their corporations.

A workplace with No safety rules, No work rules, No privacy rights, virtually no rights at all...kind of like it is now but better....for them.

The market place would have No food inspections or environmental protections.

No consumer protections and we the citizens would get no access to the court system and if we do it will only be in front of an Arbitrator of their choosing and if by chance you do win in their rigged courtroom.......They'll have Tort Reform in place to make sure you get nothing.