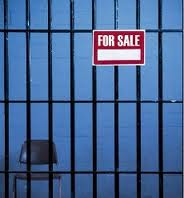 To anyone who doubted that private prisons are dangerous, we bring you today's news about the Mississippi prison riot that left a corrections officer dead.

According to the Associated Press,


A guard was killed and, at one point, hostages were taken during a riot at a Mississippi prison that holds illegal immigrants, authorities said.

The Sunday riot at the privately run Adams County Correctional Center in southwest Mississippi began around 2:40 p.m. CDT and involved dozens of inmates before it was brought under control that night.

Adams County Sheriff Chuck Mayfield told the Natchez Democrat that 15 employees were freed at one time during the uprising by opening a fence and protecting the route with guns. The sheriff said in a statement early Monday that there were at least two dozen hostages being held at one time.

Adams County Coroner James Lee confirmed that a guard died, but said he could not provide any other details until the correctional officer's family was notified. In addition to the guard who was killed, five other correctional officers and three inmates were injured.

The prison is run by Nashville-based Corrections Corporation of America. The other big bad private-prison actor is GEO Group in Boca Raton, Fla.

Private prisons don't save money. That's because the companies that run them need to make a profit, unlike the government. Private prisons have a long track record of understaffing, union-busting and letting prisoners escape.

The Teamsters fought off a plan to privatize prisons in Florida. Today, Teamsters International Vice President Ken Wood said the Mississippi riot is a reminder of what  happens when public safety is turned over to a for-profit company. Wood is also acting president of Teamster Local 2011, which represents Florida Department of Corrections officers.


Murder, hostage-taking, and injured prison employees is not the type of a correctional system that should be allowed to take hold in Florida. Regrettably, CCA has been in charge when similar violence erupted in Idaho and Vermont. The citizens of Florida should continue to let their elected officials know that prison privatization should not be an option in our state.

Crazy people Lawmkers in Michigan are now trying to pass a bill to close a government prison and send 1,200 inmates to a private prison. That is not a good idea.
Posted by Teamster Power at 1:55 PM