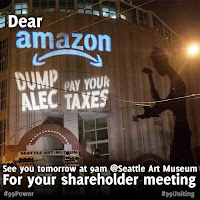 Amazon announced today it is not renewing its membership in ALEC, the corporate front group that promotes job-killing austerity policies. Representatives of several groups presented petitions with over 500,000 signatures on them asking Amazon to quit funding ALEC.

According to the Center for Media and Democracy's PR Watch,


Amazon apparently became an ALEC member in part to oppose new state taxes on online sales, but Amazon's membership dues and sponsorship grants help fund the overall ALEC agenda, which includes controversial bills like "Stand Your Ground" and voter ID as well as anti-union, anti-immigrant, and anti-environmental measures. For more on Amazon's role in ALEC and how it demonstrates the leading role that corporations play in ALEC, see Fischer's article here....

Three other companies are under pressure to cut ties to ALEC: State Farm, AT&T and Johnson & Johnson.
Posted by Teamster Power at 2:04 PM