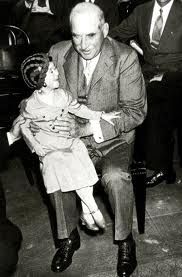 In 1933, J.P. Morgan Jr. came to testify about banking failures before the U.S. Senate's Banking Committee. While he was waiting to be questioned, a circus dwarf jumped in his lap.

The weird have turned professional since then.

JPMorgan Chase recently lost at least $2 billion and possibly a lot more in a stupid and reckless trading scheme. That's what is known as endangering the stability of the global financial system. And yet senators attacked the regulators who don't  even have the power to regulate JPMorgan Chase's trades during a Banking Committee hearing Tuesday.

The regulator's chief critic was Alabama Sen. Richard Shelby, who received $72,950 in campaign contributions from JPMorgan Chase and its employees.

Dana Milbank described the scene in the Washington Post:


As the panel held the first hearing on the JPMorgan losses, Sen. Richard Shelby (Ala.), the committee’s ranking Republican, glowered at federal regulators and charged that they “didn’t know what was really going on.”

“When did you first learn about these trades?” Shelby inquired.

Gary Gensler, head of the Commodity Futures Trading Commission, admitted that he had learned about them from press reports.

“Press reports!” Shelby echoed, with mock surprise. He smiled. “Were you in the dark?”

Gensler tried to explain that his agency does not yet have authority to regulate the bank, but Shelby interrupted. “So you really didn’t know what was going on . . . until you read the press reports like the rest of us?” he asked again.

But Shelby wanted him to keep saying it. “You didn’t know there was a problem there until you read the press reports?”


The trading scandal at JPMorgan highlighted the urgent need for tougher regulation of Wall Street, but Shelby’s harangue was part of a larger effort to use the scandal as justification to repeal regulations.

Just guess how much JPMorgan has spent on lobbying and campaign contributions in the last three years.

Here's the really disgusting part: JPMorgan drove an Alabama county -- that's in Shelby's own state -- into bankruptcy through a predatory swap deal. Reported Think Progress at the time:


In a desperate attempt to avoid bankruptcy, Jefferson County furloughed employees and cut back on its police force so much that it no longer dispatched officers to traffic accidents. Of course, Jefferson County officials played their role in the fiasco, accepting bribes in connection with the deal. But JP Morgan was at the forefront, paying off officials, collecting tens of millions in fees, and foisting a risky deal onto the people of Jefferson County when there was no economic reason for it (other than to bolster the bank’s bottom line).

Now some Jefferson County residents have to choose between heat and water because the sewer bills rose more than 400 percent in the last decade.

That must be the regulator's fault, too.

Posted by Teamster Power at 3:40 PM