Teamsters in droves are joining the Occupy Wall Street (OWS) movement as it spreads to more than 200 cities and towns from Portland, Me., to Honolulu, Hawaii. Livestreams are up in 10 cities.
﻿
New York Teamsters were with the protesters in the first few days of the occupation, and the OWSers have taken several actions in solidarity with Local 814's locked-out art handlers.  More unions are joining in, as AFSCME, CWA, ATU, SEIU Local 1199, TWU Local 100, the Retail, Wholesale and Department Store Union and the Professional Staff Congress-CUNY issued statements of solidarity and support.

We understand a New Jersey Teamsters local is getting involved (not sure which one yet). Tomorrow, a bus from Teamsters Local 445 in Rock Tavern, N.Y., will head down to Wall Street. Here's the announcement from the Hudson Valley Area Labor Federation:


Community Labor March to Wall St./Zuccotti Park.  Union members and community members impacted by the economic crisis have been demanding that Wall Street and New York's wealthiest pay their fair share of taxes. Let's march down to Wall Street to welcome the protesters and show the face of New Yorkers hardest hit by corporate greed. It's time to stand together, and continue what was started in Wisconsin!

Sister Joleen Metzger joined the OWSers in New York over the weekend. and reports several thousand people marched across the bridge to Brooklyn.  Here's her report from Facebook:


There was such an eclectic outpouring of support; the free-spirit giving hugs to the Ron Paul fans, the mothers with the jogging strollers walking beside the tattooed anarchists, the retired servicemen petting the aging hippie's dog. Everywhere you looked the common thread was a unified people looking to make a change.

Brother George Corneliusson, a retired Teamster from Connecticut, will be at Occupy Hartford tomorrow. He posted on Facebook,


Occupy Hartford (ct.) wed. Oct. 4 bushnell park 8:30 am I invite my fellow Teamsters to join me especialy my fellow Retirees!

Sister Kelly Leigh Andrews drove three hours to a planning meeting in Nashville. Teamster signs were spotted over the weekend at the Occupy Los Angeles protest in front of City Hall and today in Montana. Sister Nancy Wolffe will be at Occupy Colorado Springs. Statements of support and announcements of local actions are posted by Teamster Locals, like 570 and 355 in Baltimore and 992 in Hagerstown, Md.

Here's a website where members of the 99 percent tell their stories. At last count, there were 41 pages of pictures like this one: 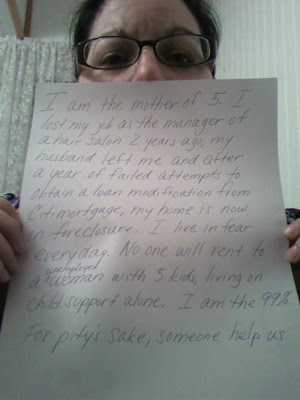 And a tweet from Seattle about the nature of the movement:


@Selltos Some vandals tagged bizs near #OccupySeattle. The occupiers cleaned it. This is a peaceful movement! Don't ruin it.

Posted by Teamster Power at 3:33 PM