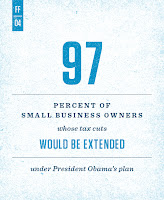 Now it's up to the House of Representatives to go along.

Here's what happened late this afternoon: The Senate rejected the Republican amendment to extend the Bush tax cuts to everyone by a vote of 45-54. The plan, according to ThinkProgress. would have extended all of the Bush tax cuts — including those on income of more than $250,000 — while eliminating tax credits that help 20 million working families.

Then the Senate voted FOR the Democratic plan that keeps the tax cuts for households earning less than $250,000 a year -- the 98 percent. Reports the Wall Street Journal:


Not one Republican voted for the one-year, $250 billion measure. Sens. Claire McCaskill (D., Mo.), Jon Tester (D., Mont.) and Bill Nelson (D., Fla.) voted with their party, in spite of pressure to break with Mr. Obama ahead of competitive re-election races.

For those tax cuts to take effect, the House of Representatives now has to approve the Senate proposal.

Here's what President Obama had to say about it:


House Republicans are now the only people left in Washington holding hostage the middle-class tax cuts for 98% of Americans and nearly every small business owner.  The last thing a typical middle class family can afford is a $2,200 tax hike at the beginning of next year.  It’s time for House Republicans to drop their demand for another $1 trillion giveaway to the wealthiest Americans and give our families and small businesses the financial security and certainty that they need.  Our economy isn’t built from the top-down, it’s built from a strong and growing middle class, and that’s who we should be fighting for.

Posted by Teamster Power at 6:14 PM