Calif. to have 1st real high-speed rail system in US

The new rail system would be the largest public works project in the state and could potentially employ hundreds of unionized maintenance of way workers and locomotive engineers and trainmen, according to the Teamsters Rail Conference.

John Murphy, director of the Rail Conference, said lawmakers in Sacramento got it right when the voted to fund the project. He said, 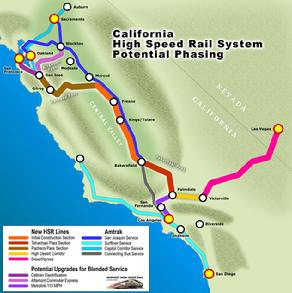 It’s a terrific day for the residents of California and the rail union members who will put their skills to use in building and operating trains on this high speed rail line ... it will help hundreds of people find good union jobs and the high speed rail line will provide a viable alternative to car and plane travel in the state.


This legislation will help put thousands of people in California back to work. By improving regional transportation systems, we are investing in the future of our state and making California a better place to live and work.

CNN reported that California will issue $2.6 billion in bonds, and the federal government will provide another $3.2 billion, to build the first section of the high-speed rail between Merced and the San Fernando Valley on the north side of Los Angeles. It was part of a transportation bill that funds improvements to the state's rail system with $4.7 billion in state funding and $7.9 billion in federal and local funds, officials said.


The California High-Speed Rail Authority says the rail line initially will allow passengers to zip between San Francisco and Los Angeles via the Central Valley in two hours and 40 minutes. The line is envisioned to carry travelers between Los Angeles and San Diego in 80 minutes and, in the northern part of the state, will eventually connect to Sacramento, the authority said. In all, the 800 miles of track will include up to 24 stations, the authority said.

The closest speed to the California project is Amtrak's Acela Express in the Northeast, which averages 80 mph between New York City and Washington, D.C., but reaches 150 mph for a few miles near Boston, Kunz said. That line is not built on a dedicated high-speed track as California's line will be, he said...

Joseph Shelhorse, the association's vice president of business development, said his group is working with developers on private-public partnerships to build high-speed track beds in exchange for real estate development rights above and around high-speed train stations -- much as the U.S. government under President Abraham Lincoln did for the first transcontinental railroad.

...President Barack Obama is a big supporter of high-speed rail. His administration has proposed spending $53 billion on a national high-speed rail network, while he has set the goal of giving 80% of Americans access to high-speed rail within 25 years.

Posted by Teamster Power at 1:56 PM