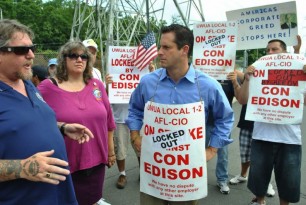 Consolidated Edison utility workers say they need help. Eight thousand of them were locked out of their jobs 16 days ago. They're already picketing at 20 Con Ed locations in New York City and Westchester County. This from Tim Holmes on the Teamsters Facebook page:


Today in History your Brotners and Sisters of Li al 1-2 are locked out .There Standing Firm , Their converting this fight into Elitist Austerity, We get Raises They Dont. They need your help in a big way, things like blocking roads, refusing pickups, Loosing trucks, Whatever tricks stunts or in their face maneuvers you dare bring brothers and sisters. We need your Mojo!

One way you can help your union brothers and sisters in New York is to show up at their rally for a fair contract tomorrow. It's at 5:30 pm in Union Square.

All the workers want is fair pay if the company is making money. The Indypendent tells us it is:


And it is: last year, Con Ed grossed over $1 billion in profits, while its CEO Kevin Burke took home almost $11 million. According to Local 1-2, Burke has requested Con Ed shareholders to approve another pay raise while he is simultaneously seeking to cut worker benefits.

To give you an idea of the lockout's impact on Con Ed workers, here's a post by Quinton Vernon on Facebook:


My wonderful wife and I, are celebrating our 8 anniversary tomorrow. All we can afford to get each other are cards that we'll be exchanging after I get home from the union rally to fight for my pension and benefits to support our family. Thanks Con Ed. My family won't ever forget this. I promise.


There are 3.2 million Con Edison customers and 350,000 reside in Westchester County. There is never a good time for Consolidated Edison workers to be on picket lines and that is especially so when it is as hot as Hades! Utility workers are the backbone keeping us in the 21st century, with all the creature comforts, and it is critical that management provides the framework for an immediate and lasting agreement. The sooner these hard working men and women are allowed to return to work, and both sides meet with open hearts at the bargaining table, the better for Westchester and beyond.

At least the company responded to public pressure and reinstated the workers' health insurance.
Posted by Teamster Power at 10:31 AM