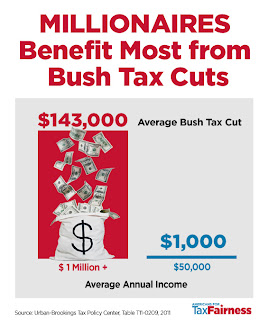 This just in: The Senate will vote tomorrow on extending the Bush tax cuts for the bottom 98 percent of  Americans. Taxes for the top 2 percent would rise.

The Teamsters signed on to a letter along with 130 other organizations asking the Senate to raise taxes on the wealthiest Americans. It reads, in part:

It is time to begin to restore some basic fairness to our tax system.

Ending the Bush-era tax cuts for the richest two percent of Americans, households with incomes over $250,000, is simply asking them to pay their fair share. Americans admire financial success, but over the last decade wealthy Americans were enriched even further by substantial tax breaks while millions of other Americans saw their wages drop in real terms. The gap between the richest households and everyone else in the U.S has widened to historically high levels.

Read the whole thing here. And call your senators to tell them to vote against extending the Bush tax cuts for the top 2 percent. Dial 888-744-9958.