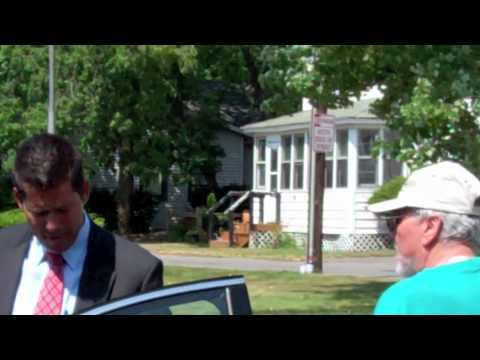 So, when faced with this dreaded situation, here’s how he handled it.

Wayne Olsen, a 73-year-old Wausau resident and a Vietnam vet, just wanted to find out if Duffy supports raising the minimum wage. But Duffy basically told Olsen he’d have to wait until next years town hall meeting to speak with his congressman:


CONSTITUENT: Mr. Duffy, when are you going to hold your next town hall meeting?

DUFFY: We said we’re going to do one every year, and we’ve done that. So if you want to come set up an appointment in my office, we’d be happy to have you come on by.

CONSTITUENT: What I’d like to know is the law to raise the minimum wage… [Duffy drives off]

Last month, House Democrats proposed increasing the minimum wage to $10, allowing it to catch up to inflation over the past 45 years. Duffy has not taken a position on the bill, but fellow House Republicans continue to block it from coming up for a vote.

I was a meat cutter and I worked at a concrete plant and at different manufacturing plants. When I was a security guard, I made minimum, and when I was a janitor, I made minimum wage...[Duffy] doesn't support anything that has to do with the common person. He supports big businesses with tax breaks.

But we shouldn’t be surprised with Duffy’s indifference toward the people he represents. After all, most of his constituents couldn’t possibly understand the hardships he faces with his measly $174,000 annual salary.

Last year Duffy whined about how hard it is for him to get by on an income that is three and a half times the median household income in Polk County. Then the anti-labor politician couldn’t figure out why he wasn’t welcomed at the Wausau Labor Day parade – activists launched a Facebook page telling Duffy, “get your own damn parade.”

Given his poor performance in representing his working-class constituents, maybe it’s time to impose a maximum wage on anti-worker politicians like Duffy.