It can be deadly to work in Wisconsin 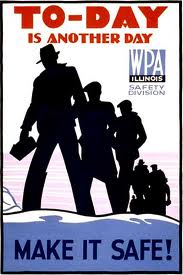 ...but don't expect anyone to do much about it.

United Contracting, a Wisconsin painting contractor, has a terrible work safety record. That doesn't stop job-killer goggle-eyed homunculus now employed as the assistant director of employee relations at the subsidiary of Koch Industries once known as the state of Wisconsin Gov. Scott Walker from giving it a fat contract.


United Contracting has a safety record so poor the painting company is on a federal list of 273 employers classified as “severe violators” of safety standards for workers. But the company isn't lacking for work, including contracts awarded by the state.

The company landed on the list last summer after a painter plummeted 25 feet while painting a bridge over U.S. 41 near Fond du Lac. Paul Stevens, of Green Bay, fell 12 feet from a ladder onto a steel scaffold, then an additional 13 feet from the scaffold to the ground. The 41-year-old man, who was wearing an unattached safety harness when he fell, was flown by helicopter to a hospital.

Only a month earlier, an Occupational Safety and Health Administration inspector saw a United Contracting painter straddling a guardrail while working on a different bridge near Fond du Lac.

The two incidents triggered OSHA to put United Contracting in the Severe Violator Enforcement Program, which was created in 2010 to target “recalcitrant employers that endanger workers by committing willful, repeat, or failure-to-abate violations.” OSHA issued $149,200 in violations.

The injuries, the fines, the pattern of violations, however, aren’t enough to keep United Contracting from landing work. In April, Gov. Scott Walker signed a $175,000 contract for the company to repaint a bridge near Appleton over U.S. 41 near Fox Cities Stadium.

The Wausau Daily Herald reports that Wisconsin companies pay few penalties though their negligence kills their workers. Of the 184 workers killed on the job between 2000 and 2010, the median penalty was $4,200.

According to the Daily Herald,


A Gannett Wisconsin Media review of 240 workplace fatalities in Wisconsin over 11 years reveals that OSHA rarely imposes harsh fines for companies whose employees are killed on the job and often negotiates even smaller penalties than it originally issues.

Workers' families often are shocked by the outcome of the investigations, which by law aren't intended to assign blame or impose huge punitive fines. Families also are stunned to realize they have no right to sue employers in Wisconsin, even those with serious safety violations...

OSHA's mission is less about punishment and more about education and correcting safety violations, said Rhonda Burke, an OSHA spokeswoman based in Chicago.