Meet the minimum wage worker (not who you think) 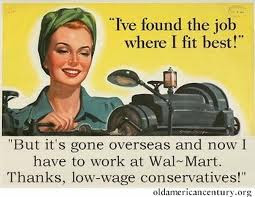 No, he isn't a teenager working at a small business part time for spending money.

The minimum wage worker is probably a white adult working full-time for a large profitable employer.

Let's raise the minimum wage, reduce poverty and put less of a strain on government services.


...increasing the federal minimum wage to $9.80 by July 1, 2014, would benefit more than 28 million workers and increase national GDP by over $25 million, in the process creating more than 100,000 jobs. Given the lackluster recovery that continues to cast a pall over the nation, this positive step should be embraced by all those who care about the well-being of working families.

If raising the minimum wage hurts job creation, how come unemployment was 3.6 percent when the minimum wage was 30 percent higher than it is now? Writes Richard Eskow in The Huffington Post,

As the NELP project notes, today's minimum wage has 30 percent less purchasing power than it did in 1968.

Corporate defenders say that raising the minimum wage will hurt employment. What does the evidence say?

We checked: The official US unemployment rate in 1968 was 3.6 percent. Today that figure is 8.2 percent. (The real employment figures, including discouraged workers and the under-employed, are even worse.)

Another no-brainer.
Posted by Teamster Power at 2:42 PM