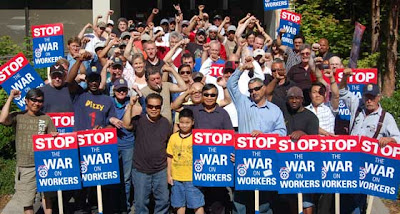 We're cross-posting this from Teamsters Local 117:

Striking Teamsters at Davis Wire descended on the King County Courthouse on Tuesday to file a lawsuit contending that the company created sweatshop-like conditions at its wire mill in Kent.

Local 117 members say that their employer worked them off the clock and denied them rest and meal breaks in an unsafe environment and failed to pay them statutorily-required overtime wages.

“We’re working up to twenty days in a row, 12 hour-shifts, with dangerous machinery running.  Every time you try to grab a bite to eat or take a break, they tell you to get back to your machines,” said machine operator and Local 117 Shop Steward, Robert Bruner.

On-the-job injuries at the facility are common.  Many workers on the picket line in Kent bear scars and wounds inflicted in industrial accidents at the plant.  To hear more about workers’ safety concerns, view the Missing Fingers at Davis Wire video on YouTube.

After the courthouse action, workers were joined by their families, labor leaders, elected officials, and community partners for a community rally at the facility to mark two months since the start of the strike.  An estimated 300 people turned out for the event.

“Workers at Davis Wire have taken bold, courageous steps to challenge an unjust employer.  Their fight for human dignity and respect on the job is an inspiration to working families across the country who struggle every day to make ends meet,” said Local 117 Secretary-Treasurer, Tracey A. Thompson.

Davis Wire is owned by venture-capitalist billionaire, Michael Heisley.  Despite his vast fortune and the consistent profitability of his company, Heisley and his Davis Wire management team have been unwilling to bargain fairly with his employees.

Teamsters Local 117 has filed over a dozen Unfair Labor Practices with the NLRB, accusing Davis Wire of bad faith bargaining, worker surveillance, worker intimidation, and illegal threats to shut down the facility in Kent.

The 85 workers at the Kent facility have been without a contract since December 1 of last year.

You can show your support of striking workers at Davis Wire by donating to the ONE MORE DAY fund or by visiting workers on the strike line at S. 194th St & 80th Ave. S. in Kent.


Here's the rally on KIRO and on KOMO.
Posted by Teamster Power at 3:02 PM