No surprise here: Sanitation work can kill you 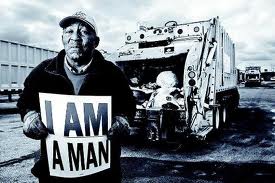 But it is. And they have.

The Seattle Times actually ran one of those "fact check" stories on Teamsters Local 117's ad that four Puget Sound sanitation workers were killed on the job since 2005. The local bought the ad to support striking recycle workers at Waste Management.

The newspaper found five workers had actually died. Here are the heartbreaking details:


The most recent was April 2011, when a 25-year-old woman was killed after recycling materials fell on top of her while she was clearing jammed plastics from a bailing machine at Smurfit-Stone Recycling and Waste Solutions in Renton.

• A 32-year-old worker for Lakewood Refuse Service died in May 2009 after the recycling truck she was driving was struck head-on by an SUV in East Pierce County.
• A Rabanco Recycling employee in Seattle was run over by a front-end loader in May 2005 as he was walking, counting bales of refuse.
• A 39-year-old man who worked for Waste Management for 18 years was killed in a forklift accident in Burlington, Skagit County, in December 2010. News reports said the accident occurred in an area where recyclable materials were loaded and unloaded.
• In July 2007, a 29-year-old recycling truck driver for Allied Waste was killed in Edmonds after his truck rolled over him, according to news reports.

CNN Money reported sanitation work is the eighth most dangerous job in the U.S. That's saying a mouthful, as 14 workers a day die in this country. CNN Money quoted our Teamster brother Harry Nespoli, who heads the sanitation workers' local in New York City:


Our guys start out in the morning with an empty truck and by the end of the day, it's full. All that time, you're in the street and you put your life on the line.

Today is Day 4 of the Seattle Teamsters Waste Management strike. Find out how you can help here.