No, unions didn't cause Scranton's problems 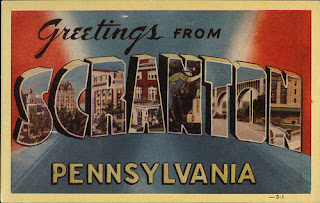 Scranton, Pa., firefighters and police officers are back to full pay after their wages were cut to minimum wage during the last pay period. How much they'll get in the future is anyone's guess. Scranton is broke.

Unions, as usual, are scapegoats for Scranton's problems, which include a declining manufacturing base and a housing bust. Here's a defense of Scranton's unions from Gary Anderson that's well worth reading. An excerpt:

...to say that unions are the reason that the city of Scranton is near bankruptcy is ridiculous, because the city is losing revenue and actually has declined in population by half since the end of WW2.

Understaffing of union positions, like firefighters, can actually have diminishing returns. Add to this that Scranton firefighters are averaging about $41,000 per year, and you can see that this is not a city that has out of control unions.

The truth is, businesses in Scranton will be decimated by the lack of spending power that the government employees had taken away from them by the city running out of money. In small cities all over our nation, government workers contributed mightily to the economies of these cities. Take those away and the city suffers and goes into further decay.

Posted by Teamster Power at 9:10 AM