Corporate bullying at the Olympics 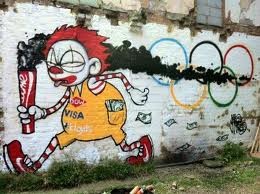 Corporate sponsors are cracking down on what people wear to the games. If you try to wear a Pepsi T-shirt or Nike sneakers to the Olympics, you might be kicked out.

Games boss Sebation Coe warned anyone wearing a Pepsi T-shirt is likely to be booted out because it would upset sponsors Coca-Cola.

And he only said spectators in Nike trainers “could probably” be allowed in although Adidas are also backing the event.

Coe defended the draconian move and said it was to protect corporate sponsors who have paid a fortune to be involved.

It’s the latest example of a ruthless brand crackdown in the run-up to the London games.

A cafe manager in London who displayed five bagels in the style of the Olympic rings was ordered to take them down. A butcher in Weymouth, Dorset, also had to take down five rings made from sausages.

And police have been told to put sandwiches, crisps and chocolate in clear plastic bags to avoid breaking rules on advertising.


"Brand Police," some 300 or more, all decked out in purple caps and tops, have been given the right to enter shops and offices in London and bring court actions and levy fines up to $31,000 for the 'misuse' of such words as "gold," "silver," "bronze," "summer," "sponsors," and "London."

According to an article in commondrerams.org...."Bars and pubs have been warned that blackboards advertising live TV coverage must not refer to beer brands or brewers without an Olympic deal, while caterers and restaurants have been told not to advertise dishes that could be construed as having an association with the event.

At the 40 Olympic venues, 800 retailers have been banned from serving french fries to avoid infringing fast-food rights secured by McDonald's."

And at the Olympic Games.
Posted by Teamster Power at 11:00 AM