Hoffa: We don't apologize for fighting for Teamster jobs 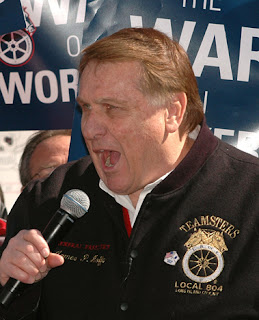 Teamsters General President Jim Hoffa wasn't amused when the editors of the Portsmouth Herald portrayed Rockingham County workers (Teamsters) as "unreasonable." They had the audacity to ask for a modest raise in exchange for more than $1 million in annual healthcare savings.

Writes Hoffa in a letter to the editor published today:


The underlying message is that county employees should be grateful they still have jobs. That's as insulting to the public as it is to the workers, many of whom are corrections officers, sheriff's deputies and dispatchers. You might as well be telling families that they should be grateful that there is any room at all in the budget for public safety.

To further your argument against public workers, you point to the recent recall elections in Wisconsin. But the only thing Wisconsin proved is that powerful corporate interests can use millions of dollars to hijack elections. Your commentary delivers the tired refrain that counterpoises jobs and wages.

The Teamsters know resources are finite and we know some cuts are necessary. But we also know that resources are not always allocated fairly. So we fight to protect Teamster jobs and living standards. That's how we represent our membership and we make no apologies for that.Rockingham County workers have done their part to help the county save money, and they deserve respect for their dedication to serving and protecting the public.

There it is.
Posted by Teamster Power at 4:54 PM