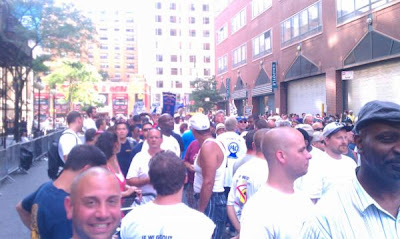 (UPDATE: We left off the link of the video that featured Chris Shelton's terrific speech. See the second paragraph.)

It's the third week of the Con Ed lockout and talks aren't going anywhere, according to the press. Teamsters yesterday joined a large, noisy, defiant rally for the UWUA Local 1-2 workers along with the UAW, SEIU 32BJ, CWA, transit workers, teachers, steamfitters, retail workers, Occupy Wall Street and more.

Check out a video of CWA Vice President Chris Shelton's stirring speech at the rally. Here's an excerpt:

The mood in Union Square was optimistic and defiant. Utility workers said they were heartened to see the strong showing from other unions.

"We should be doing this more often," said Ricky Ward, a 45-year-old customer field representative. "Even when we get our jobs back. Organized labor -- we're all one..."

A member of the United Auto Workers, who didn't wish to give her name, said the Con Ed labor dispute feels like a landmark battle that will have implications for the rest of organized labor. "This is like Wisconsin," she said. "In this case it's the private-sector, but we're talking about a company that's turning a profit -- a billion dollars in profit. If they can win big concessions from workers in that situation, that's a real bad sign for the rest of us."

The union asked New York utility regulators to end the lockout and to investigate utility service during the lockout. Stay tuned.
Posted by Teamster Power at 2:21 PM