Our brothers and sisters in Michigan are fighting back against a vicious attack by Grand Rapids Gravel. The company wants $6-an-hour pay cuts across the board. They want to cut vacation to a maximum of two weeks a year and eliminate as much as 75 percent of overtime pay. They're trying to eliminate retiree health care. Oh, and they seem to be doing fine.

The workers -- not so much. Their last raise was 50 cents an hour eight years ago.

So you know what happens when Teamsters are provoked.  Michigan Live reported:


...the 58 members of the union now say they have no choice after the owner of Grand Rapids Gravel refused to budge on $6-an-hour cuts across the board that will scale back workers' health care benefits, vacation time and overtime pay.

The striking workers drive heavy equipment trucks that haul cement to cranes and loaders used in the mining of aggregate.

The union’s last contract expired in September, and both sides have met 15 times since then to try to reach a deal, (shop steward Craig) Salzwedel said.

The unionized workforce, which last received a raise of 50 cents in 2004, has offered to take $3.26-an-hour cut in concessions in exchange for maintaining its current health care package that doesn’t have high out-of-pocket costs. 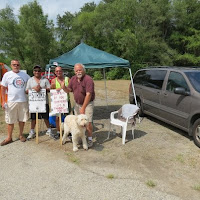 
....Day 12 of the Grand Rapids Gravel strike......scabs are busy getting nothing done.......they don't know what they're doing, and not very good at doing it......they don't care about efficiency and product integrity, like our skilled group. The guys are in good spirits cause of our rally Saturday @ the Boulder Creek gravel pit across from the owners golf course and restaurant. Over a hundred present with Michigan State House Rep. Brandon Dillon speaking to the group of proud Teamsters from LU 406.

We hear they're getting lots of support from other unions and passersby. Donations are coming in.  Salzewdel says they're thrilled:


It shows people are tired of getting shoved to the bottom. Now, there’s just an upper class and no class.