Remember in November: Senators who voted 'yes' on the Bring Jobs Home Act 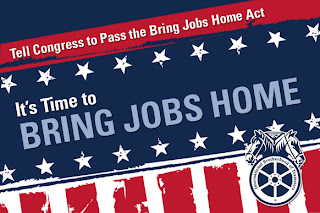 The Bring Jobs Home Act failed in the Senate last week. It would have eliminated tax breaks for corporations that move U.S. jobs overseas and given them tax incentives for moving them back.

Well, 42 U.S. senators voted against the bill. (Draw your own conclusion.)

You might want to send a thank-you email to the 56 senators who voted FOR the bill.

Send them an email here. Your message can be as simple as this:


Thank you for supporting the Bring Jobs Home Act and voting "YES" for cloture. It is common sense that we should only be rewarding companies that keep jobs here in America, not those that ship them overseas.

Thank you again for taking a stand on this issue.