Why privatization is usually a dumb-a** thing to do 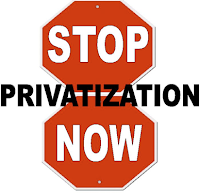 Florida and Ohio could learn a thing or two from the Olympics about the minefield that is privatization.

It was a scandal described as a "humiliating shambles."

Writes Peter Holbrook, CEO of Social Enterprise UK, in a letter to The Guardian:


The G4S debacle is a stark warning of what lies ahead. When private companies deliver public services, ultimately they answer to thirsty shareholders, not the taxpayer. It's inescapable: profit maximisation is a legal obligation for such companies.

Now Ohio Gov. John Kasich wants to privatize the Turnpike. And Florida Gov. Rick Scott won't give up his quest to privatize the prisons. Both are dumb-a** ideas. And both would hurt Teamsters, who work as toll collectors on the Ohio Turnpike and as corrections officers in Florida.

Kasich isn't earning much public support for his plan. The Cleveland Plain Dealer reported Tuesday on a hearing about the proposed privatization:


Of the 77 people in attendance Tuesday, 75 raised their hands to say they are against the governor's idea of privatizing the 241-mile toll road that spans Ohio from Indiana to Pennsylvania -- and many made strong statements for keeping the status quo.

The vast majority in attendance at the Lorain County Transportation and Community Center agreed with the analysis of the Akron Metropolitan Area Transportation Study that concluded the turnpike is an efficiently run, revenue-producing asset and, "if it ain't broke, don't fix it."

Many Ohioans cited the disastrous Indiana Toll Road privatization (though Indiana's failed welfare privatization would have qualified for comment as well).

In Florida, former Department of Corrections Commissioner James McDonough said this week that prison privatization is "a risky business". McDonough was interviewed by the The News Service of Florida:


There are some things government has to do. If you're going to be incarcerating its citizens, that's a state function, not a for-profit function. Right away, you have problems when you take that approach.

I think Florida became a very lucrative state to market private prison systems and the services that came with it. The medical issue, I think, is tied in with all of that. If the state is going to arrest people and put them behind bars, it picks up the obligation to look after their health – and not market that out to the most attractive bidder, which usually means the lowest bidder.

I'm not surprised Florida became such a target for the private companies. It's a huge market, and became, on the surface, an attractive way to go. 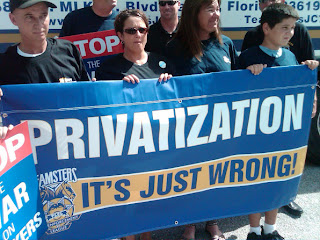 McDonough also said private companies pay corrections officers the lowest wage possible. That means substandard control of the prisons. And in the end, it isn't cheaper to farm out prison operations to a for-profit company.

But it's not. When [private prisons] grow and take increasing percentages of the inmates, they get the ill as well as the well. They get the violent as well as the non-violent. They get the dangerous as well as the stable, and so on. So I always thought that the selling point that it could be done at a percent less than it cost the state to care for an inmate was absolutely skewed data.