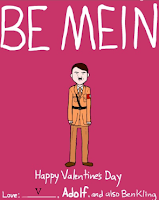 A tea party stooge planned to deliver a Hitler Valentine to Arizona Republicans who support workers. At the last minute he backed off.


This morning, Stephen Viramontes, the state director of FreedomWorks in Arizona in 2012, wrote on his Twitter page that he would “be down at the Capitol shortly to give a few legislators some (Valentine’s Day) cards.” The post included a photo of a card that featured a drawing of Hitler along with the words “Be Mein.”

He later posted that Hitler was one of six different dictators featured on a set of cards he planned to distribute to “all those (lawmakers) needing some help in supporting and passing #PaycheckProtection.”

(Paycheck deception laws are aimed at weakening workers' rights by making it hard for unions to collect dues.)

Umm, let's get this straight. Stephen Viramontes belongs to a front group that gets secret funding from billionaires. It's an offshoot of a Benedict Arnold Koch brothers front group. The group is part of a vast, shadowy billionaire-and-CEO conspiracy that bullies state lawmakers. Their goal is to  pass bills that empower corporations, destroy workers' rights, privatize government services, subvert democracy and raise taxes on everyone but the wealthy.

And Viramontes has greeting cards designed that compare democratically elected unions to a dictator? A dictator who abolished trade unions in May 1933?

Let's get the record straight, because billionaires' lackeys like Viramontes will try to confuse it: Hitler needed to appease and confuse the masses. He eliminated trade unions, jailed their leaders and seized their assets. He then formed the German Labor Front and called it a union. It wasn't a union. It lowered wages, eliminated collective bargaining and abolished the right to strike. That's not what unions do.

Today, billionaires and CEOs try to do pretty much the same thing. They claim they're trying to empower workers when they're actually crippling workplace democracy. Right now they're hell-bent on passing so-called "right-to-work" laws in Missouri, Pennsylvania, Maine, Ohio and Kentucky.  (They failed two days ago in New Hampshire.) The laws they want confer no rights on workers, but take them away. And like the German Labor Front, they lower wages and all-but-eliminate collective bargaining and the right to strike.

Check out what else those charming folks at FreedomWorks are up to: Mother Jones just reported they produced a video showing a fake panda performing a sex act on a woman wearing a Hillary Clinton mask.

Posted by Teamster Power at 1:38 PM