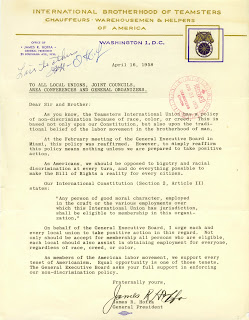 Just how strong is clear from a letter he wrote that was just obtained by the International Brotherhood of Teamsters. A member purchased a trove of Teamster memorabilia from an estate and donated it to the union.

As you know, the Teamsters International Union has a policy of non-discrimination because of race, color, or creed. This is based not only upon our Constitution, but also upon the traditional belief of the labor movement in the brotherhood of man.

At the February meeting of the General Executive Board in Miami, this policy was reaffirmed. However, to simply reaffirm this policy means  nothing unless we are prepared to take positive action.

As Americans, we should be opposed to bigotry and racial discrimination at every turn, and do everything possible to make the Bill of Rights a  reality for every citizen.


"Any person of good moral character, employed in the craft or the various employments over which this International Union has jurisdiction, shall be eligible to membership in this organization."

On behalf of the General Executive Board, I urge each and every local union to take positive action in this regard. Not only should be accept  for membership all persons who are eligible, each local should also assist in obtaining employment for everyone, regardless of race, creed, or color.

As members of the American labor movement, we support every tenet of Americanism. Equal opportunity is one of those tenets. The General Executive Board asks your full support in enforcing our non-discrimination policy.