Act now to repeal No Rights At Work in the US 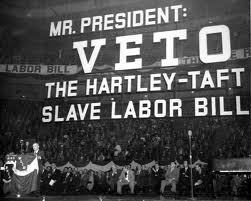 A new petition is up on the White House website to repeal the federal law that allows states to weaken workers' rights through No Rights At Work laws.

The petition is the brainchild of Stephanee Parks, a college student who is interning at Teamsters Local 142 in Gary, Ind. Here's what she told us about it (and herself):