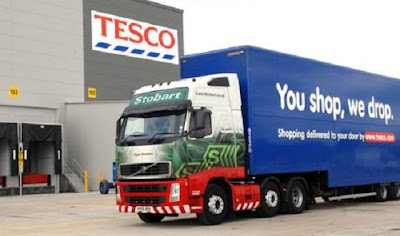 Warehouse workers at the British grocery chain Tesco are forced to wear electronic armbands that monitor how hard they work.


Tesco workers are being made to wear electronic armbands that managers can use to grade how hard they are working.

A former staff member has claimed employees are given marks based on how efficiently they work in a bid to improve productivity and can be called in front of management if they take unscheduled toilet breaks.

The armbands are worn by warehouse staff and forklift drivers, who use them to scan the stock they collect from supermarket distribution points and send it out for delivery. Tesco said the armbands are used to improve efficiency and save its staff from having to carry around pens and paper to keep track of deliveries. But the device is also being used to keep an eye on employees’ work rates, the ex-staff member said.

The former employee said the device provided an order to collect from the warehouse and a set amount of time to complete it. If workers met that target, they were awarded a 100 per cent score, but that would rise to 200 per cent if they worked twice as quickly. The score would fall if they did not meet the target.

If, however, workers did not log a break when they went to the toilet, the score would be “surprisingly lower”, according to the former staff member...

Target turned its stores into prisons through a more low-tech method. It locked its workers inside buildings overnight. The workers complained to OSHA. Josh Eidelson at The Nation reports,


...twenty-five workers allege that they were regularly locked indoors while cleaning Target stores in the Twin Cities.

“At 11 at night, I would ring the doorbell to get let in, and then from there, we would be locked in the store all night, until 7 am when they opened the store,” said Honorio Hernandez, who cleaned Target stores for three years before leaving a year ago for other work. “I was scared that something would happen, and I wouldn’t be able to get out of the store…. But I never complained about it because I was scared that I would lose my job.” (Hernandez was interviewed in Spanish.)

(Wal-Mart has also been accused of locking workers inside overnight.)

But about those electronic armbands: You can bet they'll show up in U.S. and Canadian warehouses, if they haven't already. Sign a petition to tell Tesco to stop using electronic armbands to monitor employees here.
Posted by Teamster Power at 4:20 PM