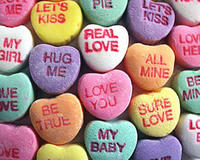 Looking for a union-made Valentine card for your Union Maid?

Teamsters can support their brothers and sisters in the Graphic Communications Conference (GCC) by looking for cards they make with the "GCC" or "Allied Printing Trades" label.


Why not give your valentine some union-made sweets this Feb. 14? It turns out, there are many union-made treats you can give out on Valentine's Day. The iconic Necco candy Sweethearts conversation hearts are made by members of the Bakery, Confectionery, Tobacco Workers and Grain Millers (BCTGM).

The list includes:
Look no further than the Labor 411's union business directory to find union-made spirits and candy. Most wine and liquor is made by UFCW, but Teamsters from Local 117 make Chateau Ste. Michelle in Washington.

And we don't need to remind you: If you're sending flowers, be sure it's one of your brothers or sisters at UPS who delivers them!